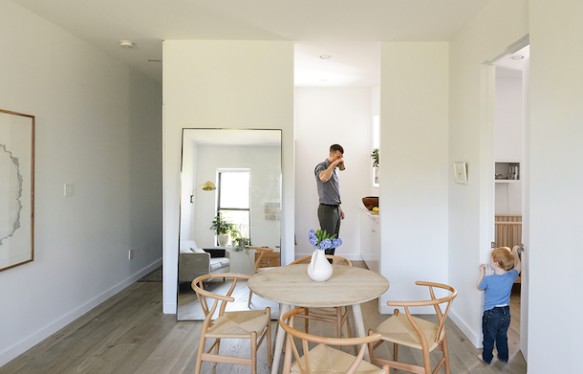 Truth is, when I started working here, my wife and I already shared a fairly modest 500 sq ft apartment in Brooklyn. But following the birth of our son two years ago, the death of my father at that same time and a frustrating house hunt in the area for something larger, we decided to move to upstate New York and regroup. Our upstate digs, part of an old converted mill, was 1700 sq ft with 16′ high ceilings.

While the upstate experience was nice enough, we quickly found ourselves missing the city, our friends and vibrant culture. This longing was made worse by the fact that I was extolling the virtues of compact living and walkable neighborhoods on this website day-in-day-out. Our new home’s floors took an hour to sweep and mop and most errands required a car.

In the spring of 2013, we started looking in earnest for a home in Brooklyn. I’ll spare you all of the gory details of the hunt, but it sucked big time. The few halfway decent two bedroom apartments in okay neighborhoods–and sometimes not okay ones–would incite bidding wars. Prices seemed to increase as quickly as inventory evaporated. It was a supremely nerve-wrecking experience.

We thought about moving deeper into the borough to find a place. Experiences at a couple open houses made us think again. One is too crappy to recount. The other involved a street closure by the police on the street where the open house was located. There was a fist fight in progress. Our broker said that he was less troubled by the fight than he was the neighborhood’s reaction; they seemed to be cheering the fight on. There was bulletproof glass at the deli’s cash register. These things were super reassuring to new parents. We realized the neighborhood was the most important feature for our home.

After much looking, we happened upon an open house for a 675 sq ft, multiple-decades-as-rental apartment with warped floors, peeling linoleum tiles in the kitchen and many other afterthought renovations. It needed a gut renovation, but it had several things going in its favor: it was in our budget, it had a flexible floorplan, it was in a great building, in a great neighborhood with a good school district and–very important for parents of an active little boy–it overlooked Prospect Park. My wife is an exceedingly talented designer; with her prowess and the LifeEdited design principles guiding us, we made an offer on the place that was later accepted.

CONTINUE ON TO PART 2