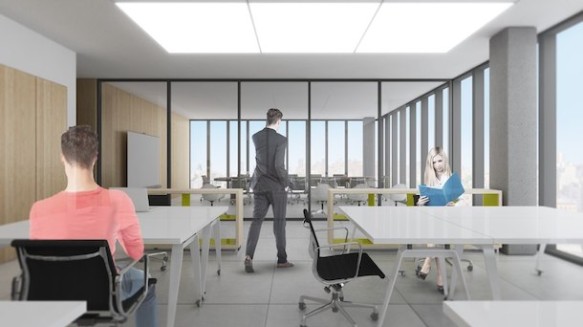 Back in the day, most non-manufacturing jobs involved showing up at an office at 9:00am, sitting at a desk for 8 hours and going home (tag a lunch break in there, and no smoke breaks because you puff at your desk). While there are still companies whose employees work with some variation of that model, there are growing numbers whose workforces are far less predictable; they might have some employees who work from home 50% of the time, others who travel 30% of the time, and contractors who are only around for short spurts. A 2012 study conducted by the Cisco Corporation attests to this, finding that 60% of today’s assigned offices and cubicles sit empty during a typical day. Given that the average American office worker has 200 sq ft of workspace, there would appear to be a lot of room for an overhaul of office architecture.

A while back, we helped conceptualize some ideas for Fast Company based on the changing nature of how and where people work.

One idea we had was geared mostly to smaller firms. The concept uses an open, flexible space and includes furniture that expands and contracts with any given day’s workforce population. The furniture, in this case the Goliath Table, can be used as a work station or conference table when pulled out. When stowed, it makes the space into a presentation or event space.

Another concept we designed was geared to larger firms. The main space uses hot desks (i.e. unassigned desks) on casters that can be configured to meet the day’s various needs. By doing away with the assigned desk, you can more easily appropriate space to the day’s occupancy versus catering to a full house, which, as the Cisco study suggests, seldom, if ever, happens. An office like this can be smaller and have much lower operational overhead.

This concept also includes a conference room with an electro-chromatic windowed wall that tints over when needed, creating separation between the two workspaces. This technology is not quite available yet. But hell, if we can replicate natural sunlight, we don’t imagine tech is far off.

The final office was not designed by us, but it is definitely a great example of an office space adapts to variable workforces. The office of Australia’s Particular Architects has walls that move on rails and double as storage and furniture that tucks and folds away, all to create a space that functions much larger than its small footprint would normally dictate.

The space is divided in half. One half is the “work floor” which has fixed stations for their team’s six architects. The other half is “The Transformer.” Particular says this of that space:

Inspired by the micro living units in Hong Kong, the space is populated with a series of track mounted plywood bookcases which serve as storage, display units and also as dividers. When filled, they form an eclectic and vibrant backdrop to the activity they enclose. Custom desk panels have been design to nestle into rebates in the shelves, creating capacity for increased desk capacity during peak project load periods.

In our quest to reduce our overall footprint–spatial as well as carbon–it helps to look at our lives holistically. We might live in a tiny house, but if we have a climate-controlled 2K sq ft office we seldom use (a rare combo admittedly), the benefits of one can cancel out the other. These office concepts help us imagine a world where every aspect of our lives–whether at home or work–is used to its maximum extent.