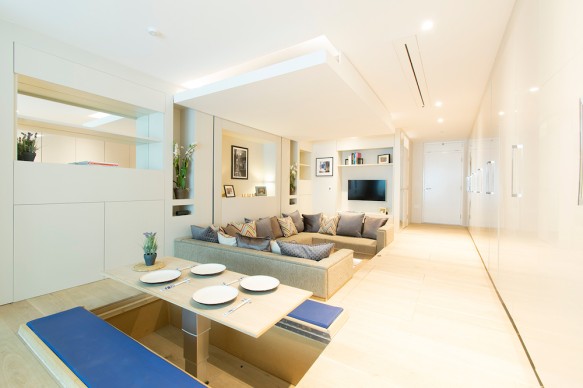 YO! Home So Small You Gotta Put Your Bed on the Ceiling

When I posted about the YO! Home prototype apartment a few years ago, I was impressed with its features: the big lounge, the hydraulic table and seating that sprung from the floor and, of course, the Darth Vader-worthy bed that dropped from the ceiling. But I also thought it more architectural confection than viable design. It was too flashy, too complex and, frankly, at 800 sq ft for what was effectively a studio apartment, too damn big. But like all prototypes, the YO! Home was and is a work in progress, subject to refinement and tweaking. Well, since we last looked at the YO! Home, Simon Woodroffe and his YO! Company have been doing a lot of tweaking…their prototype apartment that is. Their YO! Home Prototype 2 is subtler, simpler and smaller than its forebear, looking ever closer to something people would want to live in.

YO! Companies has some big ambitions for the little apartment, seeing it fulfill an important role in the global urban real estate market. YO! Home Managing Director Jack Spurrier wrote to me in an email, “YO! Home aims to transform the way we live. Space is at a premium in city centres around the world. YO! Home simply expands that space, and acts as the reinvention of the urban apartment, offering a completely new concept for compact living. The global recession has given rise to an additional compelling factor–funds for home buying are severely limited, therefore buyers are seeking maximum value (and space) for their money.”

The new apartment has evolved quite a bit from the first. Spurrier said that the moving parts were tested and re-prototyped where necessary to ensure they were reliable enough to be marketed to the public (more on that in second). There was a major aesthetic overhaul, making the whole thing look a lot less flashy. Instead of various shades of red and purple, the new apartment has a muted color palette of whites and woods, giving a clean, less polarizing look.

The apartment retains most of the functionality of the previous apartment, but at 430 sq ft, it is almost half the size. The whole interior sits on a raised platform, which houses storage as well as a telescoping dining table and seating area that hide completely when not in use. The lounge and sofa are half sunken into the platform, reducing the visual noise on the floor’s plain. There is still the same bed that descends from the ceiling to cover the ample lounge area. I’m still not convinced this setup is preferable to a wall bed considering the added complexity, though it is a big win for people who don’t like making their beds. It also frees up wall space for more storage. Speaking of, the walls are covered with tall cabinets as well as a hideaway desk and pocket kitchen.

Perhaps the most interesting thing about the apartment is that it will be the basis for an upcoming building in Manchester, England. The building will be made with 24 prefabricated units based on the Prototype 2’s design. Spurrier said that, “The size, space, layout and moving parts or ‘tricks’ are right in Prototype 2. There may be tweaks here and there for the Manchester YO! Homes, but these will be minor, and more likely aesthetic as we continually improve the look and feel of design details such as colours, finishes and lighting.”

If what Spurrier says proves to be true, this could be a pretty big news for transforming, compact architecture. While there have been a number of compelling furnished micro-apartments brought to market, most are fairly conventional in their execution. They are more or less well laid out studios with wall beds, built-in storage and appropriately sizes appliances and fixtures.

YO! Home is something altogether different. There aren’t many apartments that look or act like it, and if there are, they certainly aren’t for sale in quantities of more than one. Simon Woodroffe grandly said, “Since the invention of the city centre apartment, we’ve never really re-invented it. YO! Home is that new invention.” Looking at its elaborate design and clever features, I’m inclined to agree and look forward to seeing how the project unfolds.