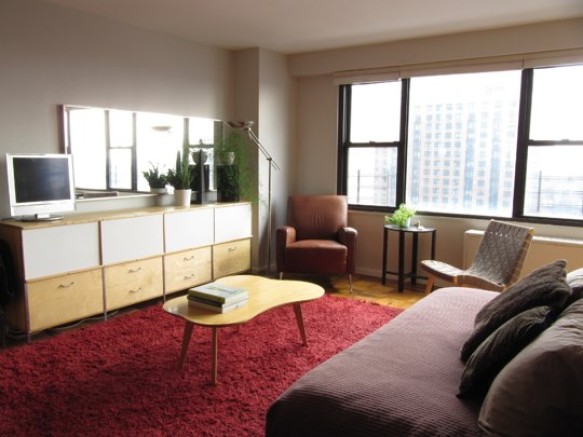 A common charge against the “edited” way of living is that its philosophy is hard to apply to a family. The Wagner home, a 630 sq ft Brooklyn studio shared by a couple and their two small children, demonstrates a creative contradiction to this charge.

The centerpiece of the apartment is a bed module that houses a single loft bed for the couple’s then four year old (the apartment was featured in Apartment Therapy in 2009) and a king sized bed that doubles as a sofa. The king size bed does not cantilever like a Murphy bed but remains stationary; a set of doors bisect the bed with the front portion serving as the sofa base. The whole thing is made out of plywood whose materials we imagine cost well less than $1000. The construction appears to have required a decent amount of labor, skill and access to tools (the bed ladder looks like it was CNC cut).

Since the module goes all the way to the ceiling, it makes the studio space into two rooms, providing some privacy for the kids. On the opposite side of the living room is a where their then eight month old baby had a crib.

In New York, space and financial constraints often breed inventive solutions like these. We’re not sure if the Wagners stayed in this apartment as their children got older (we imagine it’d get a bit tight with older kids), but we think it shows that smaller spaces with the right furniture can work for different phases of a family’s growth.