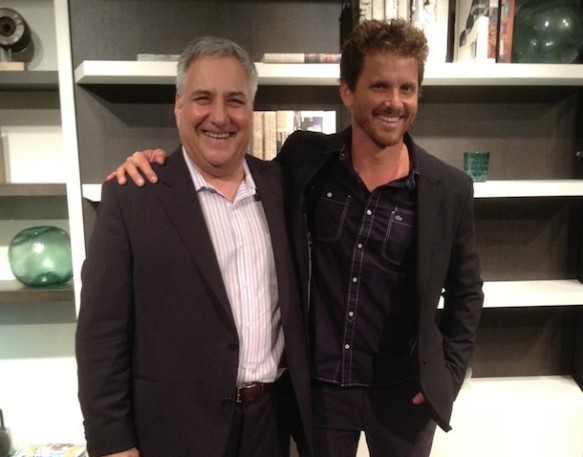 We Talk to Ron Barth of Resource Furniture

We throw the name Resource Furniture around this site with a high degree of frequency. The New York City-based retailer–who also has seven other outlets around the world–has one of, if not the largest collection of transforming furniture on the planet. More than purveyors of Murphy beds, RF has found its niche selling high end, quality transforming furniture, worthy of keeping for many years.

We took a moment to speak with RF’s president and co-founder, Ron Barth about how they came to be, what they do and why they do it.

David Friedlander: Tell us about how Resource Furniture came to be?

Ron Barth: Steve [Spett, co-founder] and I used to work at the Pace Collection on New York’s Upper East Side. We both left at the same time in 2000 and decided to start our own furniture company. Rather than having a physical collection, we wanted to start a catalog showroom. Our experience at Pace showed that people were often willing to buy furniture based on pictures. We wanted to offer European furniture with great quality, design and value. We scoured Europe, going to shops, testing furniture, turning cabinets upside down–making sure we were dealing with great manufacturers. After several trips over a yearlong period, we accumulated 460 catalogs, 98% of which were from Italy. We rented an office space with an 11’x16’ conference room where people could go through the catalogs and pick the furniture they wanted. In 2003, we got a showroom at our current location [969 3rd Ave] so we could have some floor samples.

In a bigger space, there’s no imperative to edit your life. I recently went through some stuff in my home…There were beanie babies. What was I holding onto them for? Investment purposes?

We really found our niche in transforming design in 2007. Timothy Nanni of Construct Architecture Studio commissioned us to make a two bedroom apartment in New York work for a single mother and her four children [pictured below]. We furnished the entire apartment with Clei furniture [the manufacturer of many RF’s furniture]. The project went off without a hitch. Steve and I realized we had a real business here. We ordered floor samples and installed them; bought some ad space in the NY Times and the rest is history.

Most high end furniture doesn’t take space efficiency into account because the people who can afford it usually have huge homes. We’ve been successful because we offer something unique: quality furniture with high design that optimizes any space it’s put in.

DF: Who buys your furniture?

RB: We have all types of clients. We do a lot of kids rooms. Many people, especially in New York City, don’t want to or can’t afford to move from their one or two bedroom apartments when they have a kid or two. Our furniture makes it possible for a smaller space to function like a larger one. For example, we can fit a bunk-bed, desk and sofa into a 10’ x 12’ room. There are people looking for second bedrooms that can be used as something else like an office. We get people looking to make their studio apartments into functional living spaces–not just big bedrooms. We get a lot of renters. Conservatively speaking, you can save $500/month by renting a studio versus a one bedroom. That’s $12K over two years and you have furniture that can come with you to your next place. We also get people decking out vacation homes. We have fit sleeping for eight in a 300 sq ft room. All types.

DF: What do you think are the most important aspects of designing a small space?

RB: The first thing I’d say is the smaller the space, the better the quality has to be. A small space really accentuates imperfections, so I think it’s important that tolerances and precision of craftsmanship be high. Our furniture is simple and high quality, so it doesn’t lend itself to sensory overload. When furniture is of poor quality, particularly in a small space, it’s tough to feel centered.

The next thing is to focus on the function you need the space to perform. If someone works 18 hours a day and just crashes out in their bed at night, they may just need a bed and a roof. But if you work from a one bedroom home, have a spouse and child, you’re going to need something more. We have 40 different bed products with all varieties of functionality: twin beds with desks, queen beds with sofas, full-sized beds with dining tables and so on. However you need your home to function, we can help achieve that in less space than most conventional furniture would permit.

DF: What do you see as the biggest advantages to living in small spaces?

RB: There are a number of advantages. In a bigger space, there’s no imperative to edit your life. I recently went through some stuff in my home and because we have a little extra space were holding on to things that we just don’t use. There were beanie babies. What was I holding onto them for? Investment purposes? Many people re-sign leases and stay at homes larger than they need in order to avoid confrontation with their stuff. All this stuff begins to own you, rather than you owning the stuff.

When you live in a small space you don’t accumate this kind of junk. You’re careful about what you buy, you get rid of stuff you don’t need, you don’t have that pair of shoes you don’t use.

The other thing is many people who live in small spaces often have more interesting lives. When you live in a small space with less stuff, your life becomes more about what you’re interested in rather than what you own. What are you working on, studying, who do you socialize with–these become the focal points of your life, not the things you collect or the size of your TV.

I also think it’s easier to feel centered in a smaller space. We all know what it’s like to find that perfect corner where we cozy up with a great book. Can you do that on a bench in a three story foyer of your McMansion? Of course not. There’s no center in a space like that.

DF: What are the biggest disadvantages?

RB: Sometimes, people just run out of space and don’t know how to fit their lives into their existing spaces. Sometimes this is a legitimate thing. But I’ll say that people “outgrow” their spaces as the result of not having the furniture they need. If they really tried to make their spaces work efficiently, working with the kind of furniture Resource Furniture sells, more people would find their current spaces are more than sufficient–in fact, they might be downsizing more.

DF: Tell us about one of your favorite projects?

RB: A man from Kooskia ID [middle of nowhere] calls me up and says he needs to buy furniture for his house. He says he has five children and they’re running out of room in their four bedroom house. I tell him that furnishing an entire house will cost a lot of money. He said he figured it was–it was made in Italy and there are no prices on the website. These were not the hallmarks of discount furniture stores. I suggested he might be better off moving to a larger home. How much could a five bedroom house cost Kooskia, ID?

He replied that a five bedroom house would cost about $100K more. But that was the least of it. One of his children had a disability, so moving would likely mean that he’d have to change schools or increase the commute to his school. In fact, the entire family’s routine, which worked quite well, would be disrupted if they moved. Then there’s finding this new home. He and his wife worked. They’re “free time” was spent making sure the kids were fed and their homework was done. When were they going to look for a house? Two of his kids were 15 and 16. They’d no longer need the extra bedrooms in a few years. Moreover, a bigger house would have higher taxes, greater utilities costs and require more maintenance. I got the picture.

He bought an entire house’s worth of furniture–$44K total plus another $7K to ship to Kooskia. He said that was cheaper than real estate commissions, closing costs and moving would have been for buying a new house and selling his old house. He put all of the furniture in the garage and did a room a weekend. We never met in person and that was the last I heard of him.

I’m actually not a fan of pigeon-holing the idea of “small space design.” I think it’s about finding a space that’s appropriate for you, your budget and needs. For this guy, that was a four bedroom house. When you find that space, through smart design and use of furniture, make it work as efficiently as it can. That’s the business Resource Furniture is in.