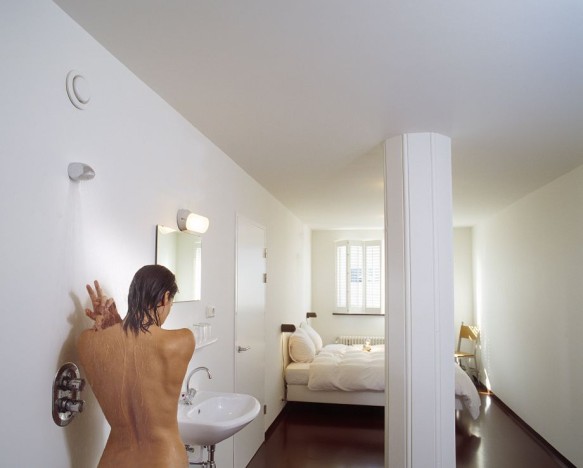 There are many rooms that are worthy of being on the cutting-room-floor of architectural orthodoxy: the formal dining room, the foyer and some might even argue the bedroom. But the bathroom? The Lloyd Hotel of Amsterdam seems to think so. Some of their room’s bath, um, “zones” break down those fascist, water-repellant borders separating sleep and suds.

Granted, the Lloyd is a hotel, a place where the penalties of failed experiments in architecture are negligible (or easy to endure for a few days). Also, there is a modicum of privacy with some of the designs such as the pivoting bathroom divider, whose door separates the shower from the rest of the room. Others, like the open plan bathroom (pictured at top) leave nothing to the imagination, and it would seem to have the spray protection of a front row seat at a Gallagher show (squeegees are included with the room).

It also should be noted that the Lloyd is a haven of unconventional temporary accommodation. With some rooms featuring things like side-by-side queen beds (ready for your Eyes Wide Shut parties), it should be no surprise that your room might have a shower in the middle of the room.