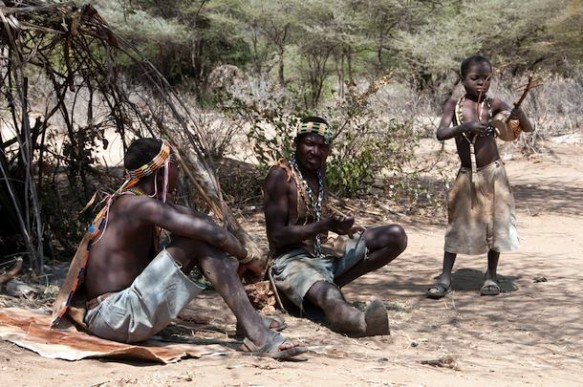 My Genes Made Me Keep It

From the perspective of evolutionary psychology, there’s a certain logic to being materialistic. In the olden days, folks couldn’t just run to Target and pick up a hypo-allergenic full-sized duvet. You had a few shots a year to hunt and skin that buffalo, otherwise you’d freeze the rest of the year. Accumulating more than we need and keeping those accumulated objects to ourselves, thereby providing for lean times, makes intuitive sense. In other words, we might be hardwired to accumulate. The only difference is that now our objects of accumulation do not stand between life and death.

This logic might not be true however. A recent study suggests that people living closer to subsistence levels might be less inclined to accumulate. The study in question sought to test something called the “endowment effect”–the overvaluing of the personal objects. Psychologist Tom Wallsten at the University of Maryland told NPR the effect is similar to the man who won’t drop the price of his house even though it’s not selling for months. He needs to sell it, but because he values it more than others think it’s worth, he holds onto it. NPR science correspondent Shankar Vedantamit, said that the effect dictates that it “feels worse to lose something than it feels good to gain something.” We would say it’s also like people who do not rid themselves of stuff they do not use because they are “too valuable” to get rid of, despite the expense and headache associated to holding onto them.

Coren Apicella, a researcher at the University of Pennsylvania, realized that the endowment effect was mostly proved by testing the behavior of college students–a demographic whose cultural biases might blare out any meaningful information about innate dispositions toward accumulating stuff. She observed the patterns of the Hadza people of northern Tanzania, some of whom were nomadic hunter-gatherers living at subsistence levels; other Hazdas observed lived in villages with market economies.

What she found was that the nomadic Hadza, people with virtually no possessions, rather than being highly acquisitive, were very easily induced to give up their stuff. Apicella explains why:

Vedantam expanded to say that in a nomadic society, it is essential to give things up because the person you give to might have something valuable tomorrow to give to you.

Meanwhile, the village-dwelling Hazda who bought stuff from markets were more acquisitive than their nomadic relatives. Vedantam said of the villagers that they “were more like us [Westerners presumably]. They fell in love with their possessions because modern economies allow people room to be selfish.”

Sometimes changing the patterns of consumer behavior seems nearly impossible. Not only are we up against a behemoth economic system whose mission is to compel us to buy more stuff than we need, we are up against the culture that has sprouted around this system–a culture that accepts hyper-consumerism as the way thing are and will be. The Hazda example might be a glimmer of hope, suggesting that while we are battling marketers, bankers, politicians and even our friends and neighbors, we are not battling our biologies.