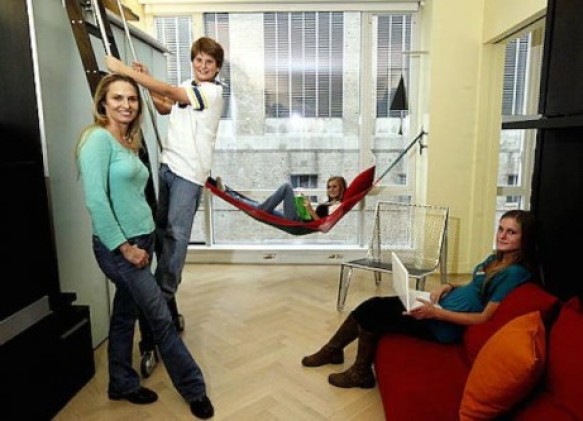 People frequently ask us for more stories about families–particularly how does one fit big families into small homes? The home of Kip Longinotti-Buitoni is a great example of such a beast. Following a divorce in 2005, she and her four children moved from their suburban home to a two bedroom Manhattan apartment. At 1400 sq ft, the space was large by New York standards, but its configuration was really only suitable in traditional terms for a couple with a young child, according to architect Tim Nanni of Construct Architecture, who was in charge of making the apartment look and work great for the Longinotti-Buitoni brood.

At the time of moving in, Longinotti-Buitoni’s children ranged in age from 10 to 17. The three oldest were girls and the youngest a boy. All of this necessitated flexibility for when the older kids left home as well as the boy’s eventual need for privacy.

Nanni said he was was tasked with providing “each family member with a satisfactory sleeping/bathing/working solution…[as well as a] big cooking/dining/gathering/entertainment space.” He leaned heavily on Resource Furniture and their line of Clei transforming beds and builtin storage to make this all possible. In terms of layout, Kip took the master bedroom while the children took the second. The children’s beds did double duty as desks during the day, and everyone found their own corner of the apartment. In addition to housing much of the kid’s stuff, the amply-sized living room featured a couple additional beds as well as a hammock, resulting in the ability to sleep nine.

Longinotti-Buitoni wrote to us in an email that the kids’ transition from their suburban home was seamless. The new layout worked great and each child “found their nooks and took to them. Marco studies out in the dining room living room area while Sybilla would study in her room, up in her bunk, which in a city apartment can feel like a separate universe completely.”

Longinotti-Buitoni wrote, that “space is a luxury and no one needs master bedrooms vast as oceans. We have plenty of room and the only thing that has mattered is the vibe in the space, which has always been great.”

Longinotti-Buitoni said that her home and its layout has inspired many moms and families in figuring out how to fit their new family members into frequently small New York apartments.

Many people, particularly families, find themselves disheartened by the enormous expense of real estate in major cities. What Longinotti-Buitoni shows is that there is more than one way to use space. “I would recommend it to anyone who wants to be in the city…[carving] out spaces within space, rooms within rooms.” Quoting her architect Nanni, Longinotti-Buitoni said, “Living in NYC is a game of inches.” Her apartment shows that when those inches are used right, a space can do far more than one ever thought possible.