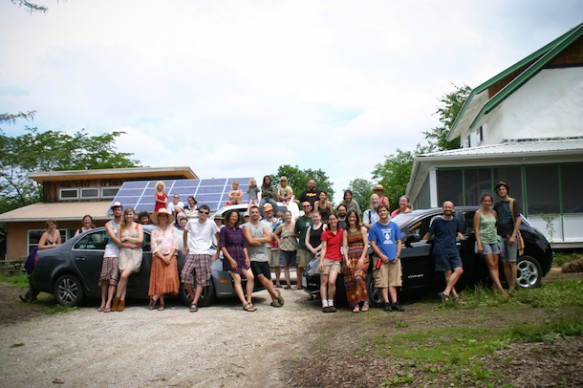 What would a truly “edited” and sustainable type of community look like (that isn’t a bunkhouse or prison cell or isn’t the Kowloon walled city)? You’d imagine people would live in small dwellings placed close together. To offset the compact dwellings, there would be large shared common areas. People would use only what they needed and most everything that could be shared, would be. Food would be grown locally and barring that, it’d be purchased collectively. Individual needs would be so few that one could live on a fraction of the money most people do, affording more leisure time. Sounds groovy, right? It also sounds like a pipe dream. Well, one community called Dancing Rabbit has been smoking that pipe for over 20 years.

Dancing Rabbit is an Eco Village, which are intentional communities, normally ranging from 50-150 people whose goal is to create a form of living more socially, economically and ecologically sustainable than most status quo offerings. DR has been going in one way, shape or form since 1993, following a few Stanford student’s ambition to go beyond rhetorically changing the world. The community started in California, but found it too expensive, zoning too restrictive and land too arid to fulfill on their economic/eco ambitions. They later moved to their current home state of Missouri, where land was cheap, zoning lax and land was fertile enough to grow without irrigation. 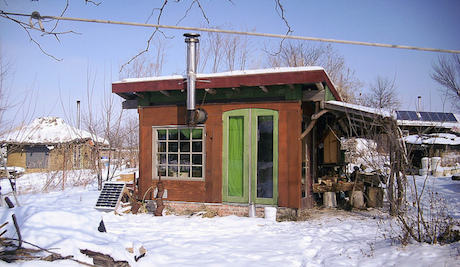 While DR occupies 280 acres, the actual village sits on about 50 acres. Houses run small. I spoke to one of DR members, Nathan Mackenzie Brown, who said he lives in a 225 sq ft home and that 500 sq ft would constitute one of the community’s larger units. He’s quick to point out that the small house size is offset by large common spaces. “I live 30 feet from our large common house,” he said. Speaking more generally, Brown thinks Dancing Rabbit achieves many of the environmental and economic advantages of the small space movement but because the community shares so much and has access to so many resources, it suffers few of the drawbacks.

I asked Brown how DR’s economy worked. “There is a great variation of professions,” he said, “but since our internal community is not that great [consisting of some maintenance and administrative jobs], most of the people living at DR have some sort of income coming from external sources or are living off of saved money.” Note that it would not take much income or savings to make this happen. Brown said most rents are about $200-300 for a room or dwelling and can be as little as $150/month for a cabin without running water. He said that the average income for a DR resident is around $6-9k year.

The community further reduces expenses by growing some of their own produce and collectively purchasing food through United Natural Foods. And since individual car-ownership is prohibited as one of their covenants, the community, through heavy carpooling, gets around with only four cars.

This sort of radical sharing and minimal living is a big leap from much of the rest of the US (and the world for that matter) and the community has had some ups and downs. At one point, their population dipped to only four people. It peaked at 65, and has 50 people at the moment, with a mix of temporary and longterm residents. But DR’s real ambitions are to increase the size to 500 or 1,000 people. “We want to make a model that addresses needs that go beyond our immediate community,” Brown told me.

Not everyone is going to want to live in such an unusual—albeit completely logical and sustainable—setting. But if your curiosity is piqued, there are a number of ways of checking out DR yourself. They have their own bed and breakfast, they run a visitor program or if you want to really take the plunge, you can rent a room or house onsite—the latter option does not require or include becoming an official, voting community member.