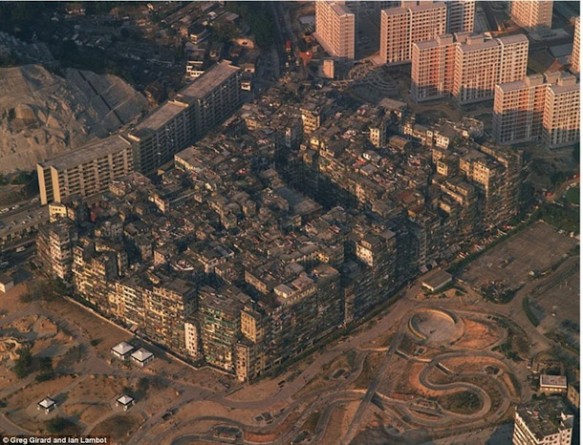 City Where Architects Dare Not Tread

At LifeEdited, our preference for urban planning leans toward density. As a general rule, greater density is more energy efficient, promotes walking and some even say happiness. But like anything, there can be too much of a good thing. And few places in the annals of history have a greater excess of density goodness than Hong Kong’s Kowloon Walled City. At one point, the city held 33K residents on an area of 0.0102 sq mile–that would be 3.2M people per sq mile! For comparisons sake, mainland Hong Kong has about 17K people per sq mile and NYC has 27K.

The city had its beginnings as a Chinese fort, erected as early as the 10th Century. The labyrinth of buildings that most people associate with Kowloon started in 1933, when the HK government demolished all but a few structures, displacing the then 436 residents. In 1940, Japan, occupiers of HK, destroyed the eponymous city wall creating a sort of tabula rasa of urban planning chaos. After Japan’s surrender, 2K Chinese refugees moved into the city. British colonial powers adopted a “hands-off” policy toward the city. This laissez-faire governance led to several decades of extreme crime, with Chinese Triad gangs running the city from the 50s through the 70s.

The hands off approach also led to the improvisational architectural scheme. There were over 300 hundred 10-14 story buildings built mostly in the 60s and 70s. All these building went up without pesky architects, urban planners or governmental oversight. 60% of homes were only 250 sq ft and many lacked utilities.

Photographers Greg Girard in collaboration with Ian Lamboth spent five years in Kowloon before it was demolished in 1992. The pictures are great as they capture more than the dizzying maze of Kowloon’s exterior; they also peer inside the city, looking at the homes, businesses and alleys where tens-of-thousands of people lived.