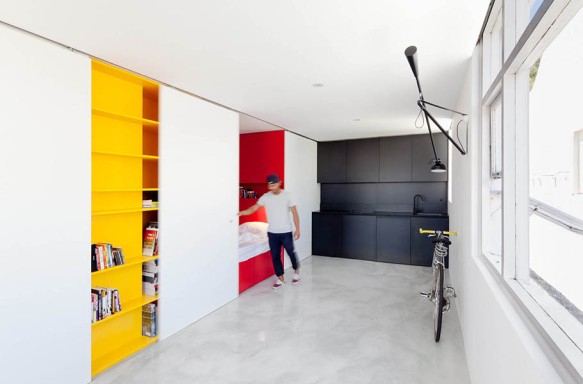 Australia isn’t exactly a haven of small space living. In fact, they’re the only country with homes larger than the US. But with increasingly high property values and a population consolidating in the cities, that might be changing. And when it does, Australian designer Nicholas Gurney will be ready. Gurney has made a couple apartments designed specifically for small, single living in the city.

Gurney’s website is as minimal as his Sydney apartments, so we don’t have a ton of information about his design philosophy. His multicolored unit, called “The Studio,” got a high commendation for the Australian Interior Design Awards. A description of the 27 sq m (290 sq ft) apartment says it “offers a proposal for future high-density urban living for one person families; the fastest growing demographic.” As of 2006, Australia has an average household size of 2.3–lower than the US and Europe–so building small will be a big deal in the coming years if they don’t want to experience massive sprawl.

We would also deduce from the pictures that he is interested in doing retrofits of older spaces, using fairly inexpensive materials (though “The Studio” sold for AUS$406K or US$366K, which seems like a hefty sum). He’s all about hiding stuff when not in use and built-in storage. He’s not that fond of freestanding furniture.

The designs might strike some as overly austere, though we’d argue that the main way to keep small spaces feeling open and spacious is to remove as much visual noise as possible from the space–something Gurney seems expert at. We think he did a great job.