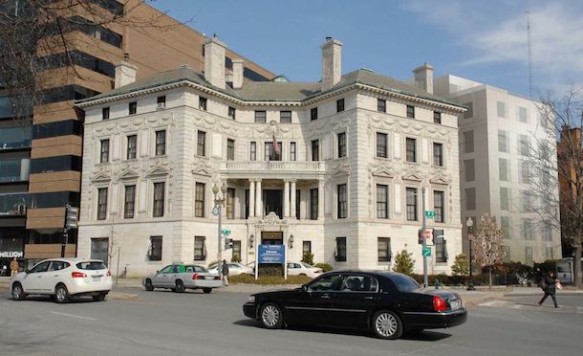 Every year, the Economist publishes something called the Liveability [sic] Ranking Report. Its rankings are based on their “Liveability Index” as well as a “Spatially Adjusted Livability Index” which takes into account seven characteristics: Sprawl, green space, natural assets, cultural assets, connectivity (ease of air travel), isolation (proximity to other cities) and pollution. Unfortunately, the States didn’t break the top 10 for 2013. But the US’s top showing wasn’t the city this author expected. It wasn’t Portland, Seattle or San Diego. Coming in at #14 of the 140 global cities ranked was Washington DC; it scored 91.2 on a scale where 100 constituted an ideal city.

While DC might be the country’s most livable city (an assessment not everyone might agree with), its medium density and fairly decentralized layout have not made it a quick taker to the micro-apartment concept, particularly in terms of zoning new buildings. But a new proposal by developer SB-Urban and architectural firm Hartman-Cox seeks to bring a micro-apartment development to the nation’s capital, using an existing–and unlikely–host.

The Patterson Mansion at 15 DuPont Circle is a 13K sq ft Neo-Classical mansion built by Chicago Tribune editor Robert Wilson Patterson in 1903. For the last 63 years, the mansion has been occupied a private women’s club called the Washington Club. In December 2013, a sale and renovation proposal to convert the mansion into a boutique fell through due to landmark considerations. The proposed addition to the mansion was deemed out of keeping with the overall structure’s aesthetic.

The SB-Urban/HC plans to succeed where the previous developer failed. Like the previous bidder, their plan calls for the destruction of the mansion’s non-landmarked 1955 addition. Rather than a hotel, their addition would be a visually-discreet, seven-story structure housing sub-400 sq ft micro apartments. The four-story mansion itself would contain several small apartments along with generous shared living spaces. The building would also feature a landscaped courtyard, big bike room and green roofs. All in all, it looks like a good design, particularly appropriate for DC’s countless government employees who might be living in town for a congressional term or two.

Though the Patterson Mansion project calls for a new structure, it reminds us of the Arcade Providence, which took America’s oldest shopping mall and turned its top two floors into micro-apartments. To us, these buildings are just as exciting as any new development. Creating higher density cities with smart, small interiors through new building is important. But converting existing, lower-density housing into innovative, high-density, city-friendly housing is the greater, and more interesting, challenge.

Many of the buildings that will house us throughout the 21st Century and beyond are already built. Some of those buildings, like the landmarked Patterson Mansion and Arcade Providence, won’t be torn down anytime soon. So the question becomes, “how do we best use what we got to support the creation of sustainable, vibrant cities?” Sometimes that means taking existing structures and using them in ways that are very different from their original purpose. We wish the Patterson Mansion project the best of luck.