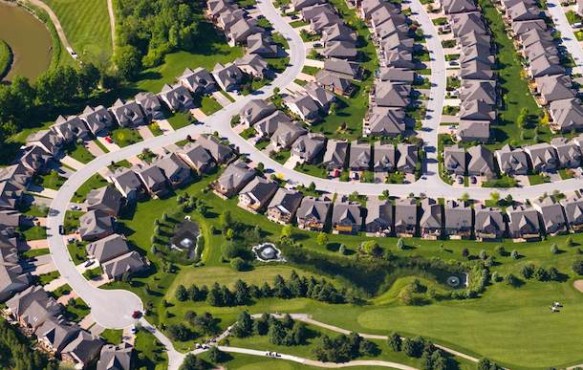 Forgive us if we seem like anti-sprawl-ites, but evidence keeps mounting that sprawl is neither planet nor people friendly. A study commissioned by Smart Growth America called “Measuring Sprawl and its Impact” looked at 221 metropolitan areas and 994 counties in the United States. The study sought to find out if there were connections between sprawl and social issues. Here’s what University of Utah professor Reid Ewing and doctoral research assistant Shima Hamidi–the study’s main authors–found out:

The aforementioned sprawl index is a scale based on “four primary factors—residential and employment density; neighborhood mix of homes, jobs and services; strength of activity centers and downtowns; and accessibility of the street network,” according to the study. An index score of 100 represents the national average. Anything above 100 was considered compact and below, sprawl.

Predictably, with a score of 203.4, NYC was the most compact large metro area. Predictably as well, with a score of 76.7, Houston ranked as the most sprawling large metro area; in fact, eight of the ten most sprawling large cities were in the south (technically, the other two cities rounding out the bottom ten–Riverside-San Bernardino/Ontario, CA and Prescott, AZ–are southern cities). 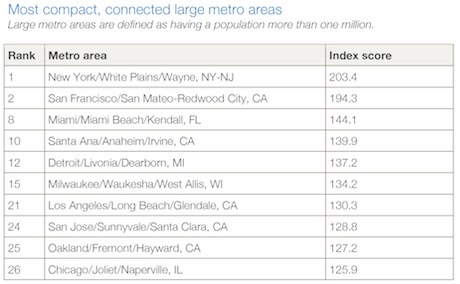 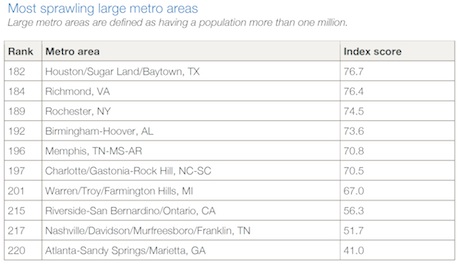 There was a pretty big drop off from second ranked San Francisco at 194.3 to third ranked Miami, at 144.1. These scores hint at how sprawl still pervades most American metro areas. Despite many indicators pointing to a more compact, urban America, there was a 1.4% increase in sprawl between 2000-2010. With few exceptions, it would seem as though we have a long road ahead of us before we offset years of urban planning predicated on cars (no pun intended). 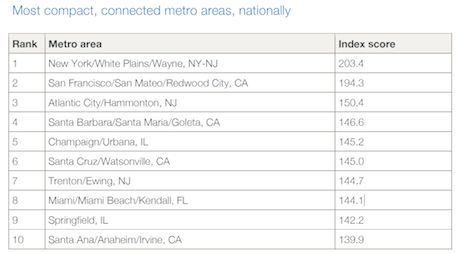 Secondly, the names of cities that ranked below NYC and San Francisco–irrespective of size–were not who we thought they’d be: Atlantic City, Santa Barbara, Champaign/Urbana and Santa Cruz bested places like Boston, Chicago and Los Angeles. Of course, this is macro-data and cannot account for specific comparisons, e.g. living and working in the Loop of Chicago will be less sprawling than living on the edges of town in Santa Cruz (the study could not get data at those discreet levels and notes as such). Nonetheless, it shows there are still compact, walkable, economically viable cities outside the ones we typically think of.

We’re not shy about expressing our belief that much of the world (and the US in particular) would be better off living a little closer, a little smaller and driving a lot less. At least in a general way, the SGA quantifies some of the social and public health benefits of this sort of living.