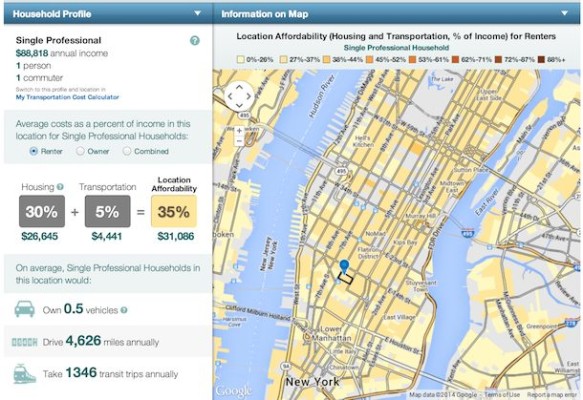 Why Living in New York and San Fran is Affordable

It’s fair to say that New York City and San Francisco are the darlings of dense, walkable urban living in the US. It’s also fair to say that rents and house prices in those cities are bat-sh#t crazy expensive; median rents in those two cities exceed $2200/month according to Trulia (and we know this is a very low figure). But assessing the true cost of living in a particular city is not something that can be achieved with housing costs alone. Incomes for the region, cost of living and, importantly, transportation costs have a big hand in determining how much it really costs to live somewhere. Calculating these manyfold considerations is exactly what the Department of Housing and Urban Development’s (HUD) Location Affordability Index does for you.

The Index has a national map that allows the public, businesses and government to access realtime data about the combined costs of living in an area relative to average incomes. For example, a single professional in Soho NYC annually pays $22K on rent and $5300 on transportation, but because he or she makes almost $90K annually, the percentage of his or her income of the living expenses (28%) make it more affordable then suburban Westchester County (42%), where, despite its lower rents, is less affordable due to increased transportation costs and lower incomes.

The map gets pretty detailed, allowing you to zoom in on very small regional zones. For example, the Index provides data for almost every block of the small neighborhood in Brooklyn where I live. The Index has a variety of filters, allowing you to see the expenses as they relate to renting your home, owning or combined. I also gives you the ability to search depending on your marital status and income bracket: moderate income family, working single, single-parent-family, etc. 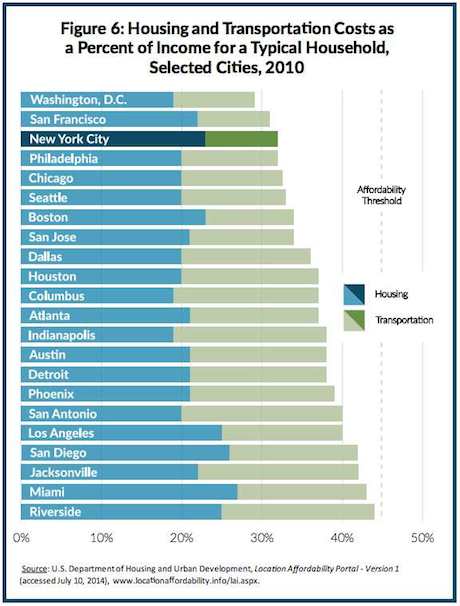 Interestingly, the Index showed Washington DC, San Francisco and New York City as the most affordable major US cities, besting places like Houston, Indianapolis and Phoenix.

Needless to say, the Index uses fairly broad data (e.g. I know few people in Soho who pay less than $2K/month for rent), but it is pretty informative. One of the prime reasons people move out of cities is housing costs. For a one bedroom in San Francisco, you might be able to buy a four bedroom house in Sacramento. But as the Index shows, you can’t look at housing expenses in a bubble.