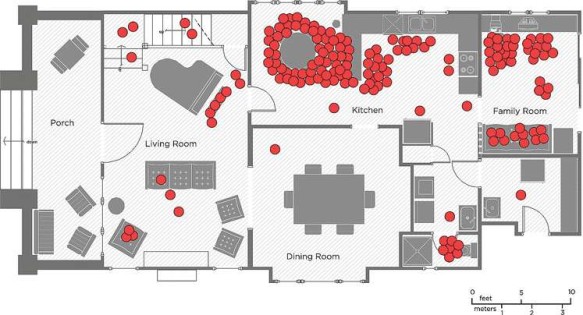 The above image was taken from an article in a Wall Street Journal article about the book “Life at Home in the 21st Century.” The UCLA group responsible for the book followed 32 middle class Los Angeles families around their homes, tracking their every move to see how people actually live nowadays. This image shows “the location of each parent and child on the first floor of the house of ‘Family 11’ every 10 minutes over two weekday afternoons and evenings.” In other words, primetime for their waking hours at home.

The activity on this floor, which measures around roughly 1000 sq ft, is concentrated almost exclusively in three rooms: The dining, kitchen and family rooms; the latter room’s activity focused around the TV and computer. We estimate that around 400 or so square feet of those 1000 are actually used with any regularity.

Family 11’s house is very typical in size, if a bit smaller than the average new home, which was 2,662 in 2013. For comparison’s sake, in 1950 that same number was 983 sq ft and there were, on average, about one extra occupants in each of those smaller homes as well.

While we don’t want to assert that there exists a correct house size for everyone, if this case study is indicative of how many/most American households use there homes, it begs a couple questions: Why are American homes so big? And what would homes look like if designed around how most people behave? It wouldn’t be hard to imagine that this Family 11 could easily live in half the space they currently occupy.

An article in the NY Times from a couple years ago called “The Big Shrink” illustrates how our homes might look if based on behavior, not convention. The Kelly’s, a family with two adolescent children who were profiled in the story, traded in their 3200 for a 1200 sq ft home (Pictured above. Built in 1954 incidentally). Like Family 11’s home, the formal living and dining rooms were barely used, less one family member, as Greg Kelly explains: “We had a dining room and a formal living room—that was where the dog lay on the couch, that was his room.”

We’ve often argued that micro-apartments make complete sense based on the way the majority of single people live. Our question to readers is, “How would you design a home if based on your behavior, not architectural convention…for singles, couples, families, etc.?” Let us know what you think in our comments section.

[Note: this post was originally published on December 14, 2012. A few updates have been made.]