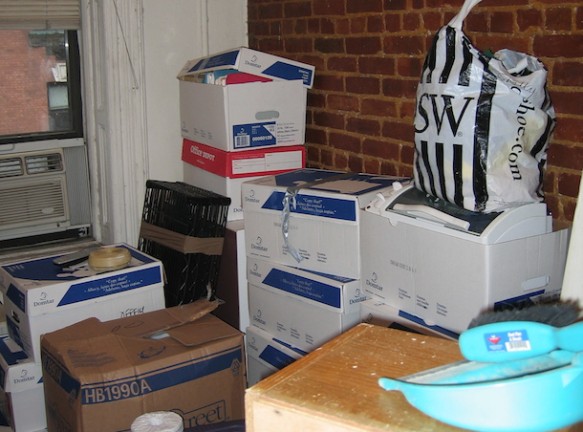 Tossing X Is Easy If You Know Why

It’s hard to imagine 90 square feet reaching across the globe, but that’s what happened after I moved into that now infamous tiny Manhattan apartment. Prior to deciding whether to move into what some have called “one of the smallest apartments in the world,” I went through my list of living priorities:

When the answers to all of the above came back a resounding “Yes!” the decision to move into that place was a no brainer. But then came the hard part: culling my possessions. These were items I’d lugged around for years never able to part with. However, now that I had found my “why”–to experience life more, write a book and not work my tail off to pay rent –I could get rid of “X” without a second glance. This included clothes, books and all my kitchen supplies except for a hot pot and toaster oven since the studio was kitchen-free.

I set my sights on living in New York City for just a year. After that I planned to move into a normal-sized apartment in the burbs.

Yet something happened inside those 90 square feet. My life got better. And bigger. And fuller. Did I really want to give that up for more closet space? With my overhead lower (no pun intended), I now had more time to write, ride my bicycle, read books, see theater, visit friends and travel. I was still working hard, but on my own schedule, and the stress was less. I also finished my book, something that had been on my To Do list for over a decade. I might have been living with less, but I had gained so much more. All because I had figured out my “why.”

After the video went viral and the landlord discovered I was subletting illegally, I was handed my walking papers. At first I was frightened. Apartments in my neighborhood, while larger, were more expensive. Would I have to get another 9-5 or move out of Manhattan? Granted it wasn’t the end of the world, but I had created a lifestyle I wasn’t so ready to give up. 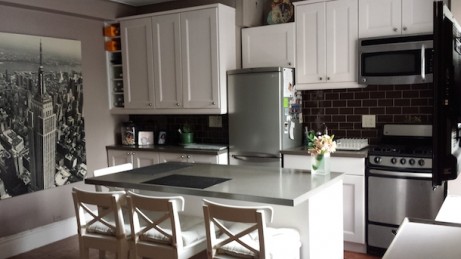 My grandfather suggested I buy an apartment. Having been saving for years, I looked around. And I found. The one-bedroom was just two avenues away from the tiny residence, was in my price range, and happened to be five times larger (my kitchen pictured above). Not that I was looking for more space. People joke and ask what I do with all the extra space and the answer is simple. I fill it with family and friends.

It’s been almost three years since I moved out of that apartment, but I often think back on those years and smile. For such a minuscule space, it left an enormous impression.