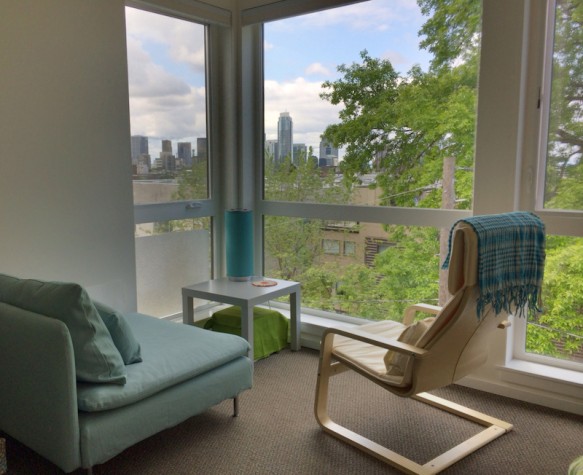 As a New Yorker, burdened as I am with our stereotypical New York-centricity, it kinda pains me to admit that Seattle is America’s micro-apartment capital. Seattle’s micro-apartment’s might lack the flash of NYC’s adAPT pilot program or the innovation behind Panoramic Interests‘ San Francisco develops. But what Seattle lacks in bling, it makes up for in volume. Whereas you could count the number of proper micro-apartment buildings in NYC and SF on your hands and toes, Seattle boasts at least 50 micro-apartment buildings and a couple more in the pipeline. Seattle has created a type of micro-apartments that is low-frills, furnished, affordable and almost always located close to transit hubs. Though perhaps not much more than glorified boarding houses, we see them as promoting simple, thrifty, car-free living.

But for all the publicity Seattle micros have received, there have been few reports as to what it’s like to actually live in one of these micro-apartments.  A couple months ago, Nicole Hennig reached out to us with exactly that. She lives in one Seattle’s many micro-apartments (more specifically a building by Footprint Properties) and she gives us a pretty great account to what it’s like to live in one.

Hennig is not necessarily the stereotypical micro-apartment dweller, who she says are mostly people in their 20s in the building where she lives. After leaving her job of 14 years at MIT at the beginning of 2013, Hennig, a self-described Baby Boomer, started her own business helping librarians and educators find and use the best mobile technologies for education. Because all of her work is done online, she decided to spend a few years exploring living in different locations. Much of last year was spent in Oaxaca, Mexico and she has spent this year bouncing between different Airbnb properties along the West Coast.

She came to Seattle in part to live in a micro-apartment. “I had been following the ‘tiny house’ movement for quite a while,” she wrote to us. “But I prefer urban areas to rural, and it seems most tiny houses need to be located in small towns or rural areas. So that fact that micro-apartments exist, usually in walkable neighborhoods of big cites–that sounded perfect to me! (and it is).”

She looked around at various micro-apartments in Seattle–many of which she found too tiny and depressing–before finding her current place in the Capitol Hill neighborhood. The apartment is roughly 300 sq ft with floor-to-ceiling windows that have a view of Seattle’s skyline. “The great view makes my tiny space feel big,” she told us.

The apartment costs $1000/month, which includes basic furniture, Internet, and all utilities. That includes a $50/month premium to have a six month lease. While not dirt cheap relative to other places in the neighborhood, she sees many perks. She wrote, “I could have found a much larger, full studio apartment in the same neighborhood for $1,200, but I would have had to pay extra for utilities and Internet, buy more furniture, and commit to a year-long lease.”

“The best part of living in this micro-apartment,” she writes, “Is that it makes living in what is normally an expensive neighborhood affordable, by cutting back on space. Space is the thing I care least about since I have very few possessions.”

Hennig is a poster child for lightweight living. She writes, “I prefer experiences to things and I like working for myself. I’d rather rent than own practically everything in my life. I’ve owned thousands of books over the years and now I’m happy to only have e-books. I don’t own any more music or movies, preferring Pandora and Netflix. If I need a car, I use Zipcar, Car2Go, or I get a ride from Sidecar, Uber, or Lyft. When I was in Portland I rented a bike from a local person for the whole six weeks I was there, using Spinlister (for a much cheaper price than a bike shop rental).” 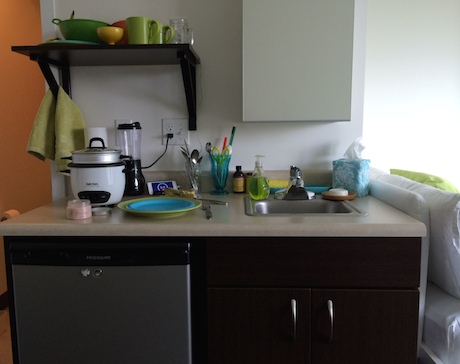 Of the building itself, she doesn’t report much in the way of community spirit, saying that, like most city-dwellers, most residents keep to themselves. And though there are communal kitchens in her building, she rarely sees anyone in them. She prepares her food in her apartment, mostly using a little rice-cooker/veggie steamer, and a small travel blender, as well as occasionally ordering out from the bevy of great, cheap takeout places nearby. 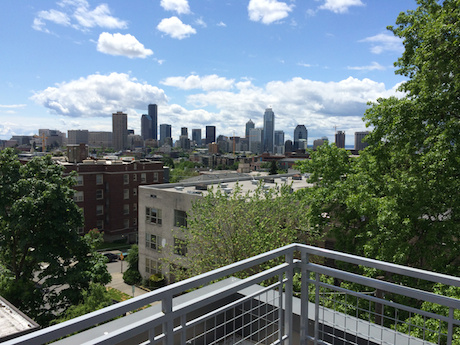 “People do use the roof deck one level above me,” she writes. “There are chairs and grills for cooking out. I met a few people from the building on the 4th of July when I got home from a party–everyone went up to view the fireworks from the roof.”

While this sort of minimal living might seem to discourage feeling grounded and tending longterm relationships, she says the opposite is true. “I consider my home to be wherever I am. It’s very easy to keep in touch with my closest friends and family in Boston, Vermont, and San Francisco, and eventually I’ll probably build one more community of friends somewhere. Then I will float between them at different times of year. I collaborate online with others on some of my work projects, so I never feel isolated in my work life. In each location I’ve met friends of friends to hang out with and I always end up getting invited to holiday celebrations, bike rides, tours of the city by locals who like to show off their city, and so on. I also become a regular at the various coffee shops where I work and chat with the employees there.”

“Overall, I would say that a micro-apartment is perfect for my nomadic life, making it affordable and convenient to live in a great urban neighborhood for the nice-weather part of the year,” Hennig writes. “I love my view, and my neighborhood and I love having few possessions. When it’s time to move, I’ll probably hire a Task Rabbit to come get the few furniture and household items I purchased to use while I’m here and sell them on Craigslist for me. I’ll probably pack of a box of a few items and mail it to myself for use in my next six-month rental–or I’ll just have him sell all of it for me and go back to staying in furnished Airbnb rentals for a while, I’m not sure. I might use this ‘closet in the cloud’ service [MakeSpace Air] I heard about recently to store a few things until I find the next apartment.”

In many ways, Hennig embodies a sea-change in terms of how people can live. She forgoes space for location, she uses technology to both reduce her possessions and professional location dependence. It’s a lighter, less encumbered, simpler lifestyle–one that we think will be far more common in the near future. Read more about Hennig’s life on her blog Location Flexible Life.