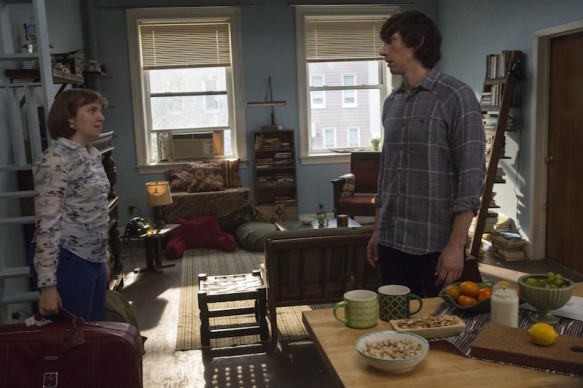 Millennials, Micros and Why Hannah Horvath Probably Couldn’t Afford to live in Brooklyn

If you watch the HBO series “Girls”, you know who Hannah Horvath is. If you don’t watch it, Hannah is an underemployed writer and substitute teacher living in one of Brooklyn’s hippest neighborhoods. Her life is filled with all sorts of interesting (albeit melodramatic) experiences and friends. She eschews cars for a bike. She wears weird clothes and is covered with tattoos. Because of her underemployment, urban leaning, experience loving, bike riding lifestyle, the character is held up in the media as the archetypal urban Millennial. Yet she is a mythical creature. In reality, Hannah would be cast out to Rochester or Indianapolis or some other city whose cost of living is in line with her income. Even with parental support or a roommate’s or Adam’s money, it’s unlikely she could afford the decent-sized two bedroom apartment she keeps throughout the series.

On this site and many others, people have been quick to define Millennial preferences, which fall along the lines of Hannah’s. They like cities, Instagram and experiences; they dislike suburbs, cars and stuff. Some of these stereotypes might hold a lick of truth, but they miss cold, hard economic realities. Through a combination of astronomical rents and stagnant wage growth in many professions, many–if not most–Millennials are being priced out of today’s major cities. A recent Bloomberg story highlights this well, showing that 13 of the US’s major cities are profoundly out of reach for the average Millennial. For example, the average San Franciscan Millennial would need to pull in an extra $60K a year to afford the city’s average home mortgage. Of course there are rentals, but that scene is just as bad. The city’s median rent is $4,225 month. 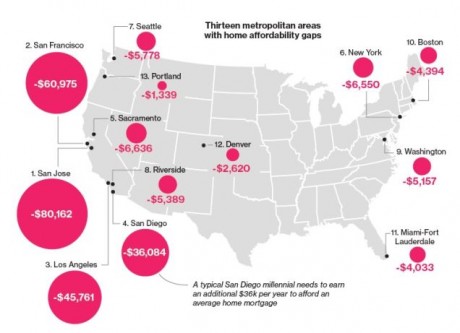 So if they’re not living in Greenpoint or the Mission, where are they living?

Sometimes I am guilty of creating a polarity, where people either choose to live in the city center or far afield in the suburbs. But this is not an accurate polarity. There are many stops between city center and cul du sac, and a recent article in Gizmodo by Alissa Walker describes some these stops, particularly as they relate to Millennial migratory patterns.

Walker reports two major trends. First, is the urbanization of the suburbs. She says that Millennials are “looking for amenities like walkability and public transit,” but according to an Urban Land Institute study, they are more concerned about “relationships and having the time to enjoy those relationships, which doesn’t necessarily mean working long hours to pay the rent in a big city.” They want the benefits of the city, but they are not necessarily committed to living in one.

As such, Millennials are creating what one writer called Urban Burbs. Walker writes:

Millennials might not be staying in the urban cores, but rather, they’re helping to remake the urban-like enclaves that allow easy access to the city when they want it. These places where millennials are choosing to live still have the qualities of downtowns—dense housing, transit connections, walkability, good food, great bars—without the high prices of downtowns.

She points to a couple examples in suburban Chicago (my birthplace for what it’s worth), where smaller, amenity rich rental apartments are cropping up in places that have been traditionally the strongholds of mortgaged single family home suburban living.

The other trend Walker writes about is the revitalization of smaller, affordable cities like San Antonio and Milwaukee. This is a trend I’ve noticed in the micro world and reflected in my post about how micro apartment buildings are sprouting up in smaller cities. I get Google alerts for micro-apartment news and for every alert about a micro apartment building going up in New York and San Francisco, there are ten going up in smaller places like Des Moines, Kalamazoo and Buffalo.

A Bloomberg article entitled “Micro-Apartments Are Coming to the Midwest” apparently sees what I see. While cities like Columbus and Omaha might not be space starved like NYC, Millennials, looking for an apartment are willing to forsake size for a good location and low price. This consumer desire is abetted by developers who can charge more per square foot (though this is not a perfect formula as sometimes micros can cost more to build on a per square foot basis). This passage from the article to my mind sums it up:

In that light, the shift toward smaller apartments can be seen as simple economics: Smaller apartments are more profitable for developers to build and more affordable for tenants to rent. “I could paint a cooler picture about value of design, efficiency, and all of that,” says Alexander Grgurich, a development analyst at Nelson Construction & Development, which converted a century-old office building in Des Moines into 425-square-foot apartments in 2013. “For us, it’s about getting a higher price per square foot while offering a lower absolute rent to the renter.”

The same appeal of offering an attractive, albeit small $2000 micro apartment in Boston versus a $2750 conventional studio is equally recognized when the price delta is $750 versus $1000 in a city like St Louis.

I moved to New York when I was roughly Hannah’s age. I paid around $650/month to share an illegally subdivided Williamsburg duplex with four other people. It seemed outrageous at the time because I had just been paying a few bucks more for my own one bedroom in Colorado. But I suspect most Millennials moving to the city now would kill for a deal like mine.

On the one hand, I feel a certain pity for all the young people who cannot feasibly live in these exciting global cities (and I’m sure there are many not-so-young folks getting priced out as well). On the other hand, I’m a little envious. Particularly in some of the smaller cities Walker mentions, there seems to be vital cultural movements afoot. Arts and small businesses are flourishing. Young people are riding their bikes everywhere because they have the time to do so. They are doing many things they couldn’t if they were scrambling to make rent payments. Millennials, whether living in a low cost micro apartment or shared house or somewhere in between, are creating edited lives by virtue of will, not history and infrastructure.