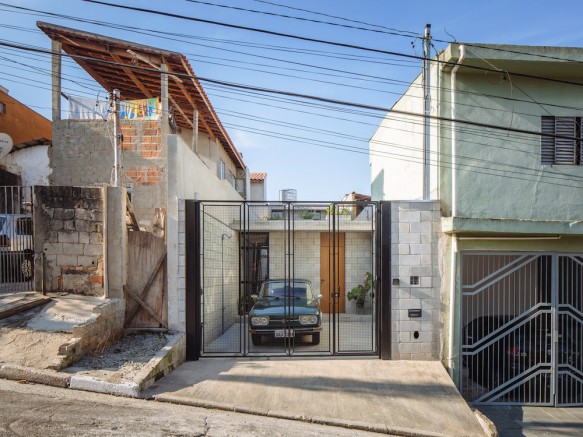 Simple is as Simple Lives

Sure, high tech micro apartments are pretty nifty, but never underestimate the power of good design even with the most meager means. Case in point is Vila Matilde by São Paulo’s Terra e Tuma Arquitetos. Ms Dalva, the owner of the home, has lived in the same location for decades.  When her previous structure started crumblilng down around her, she was faced with two options: buy an apartment that would exhaust all of her savings and put her further from her family, or build a new structure. Ms Dalva’s son reached out to Terra e Tuma to help design the structure we see here.

The house took only 10 months to construct, four of which were spent tearing down the previous structure. Time was of the essence because the longer the build out took, the more money Ms Dalva had to shell out.

Much of the house is actually retaining walls of the 16’ x 82’ lot. The walls create the house’s form while acting as supports for the neighbor’s buildings. The ground floor has two main sections separated by an inner courtyard. The front section contains the living room and the back the bedroom. There is a narrow corridor lining the courtyard containing the bathroom, kitchen and laundry. The top floor has a guest room and vegetable garden.

While no mention is made of exact costs, the place is made primarily of unfinished cinder block and poured concrete, which we imagine helped keep costs very low.

Despite its modest design and resources expending—or probably because of them—the house won ArchDaily’s Building of the Year.