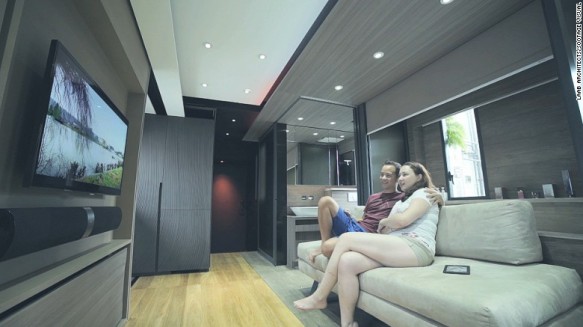 Transforming Space Must Be Seen to be Believed

With an average purchasing price around $23K per square meter, it’s no wonder that some of the world’s most amazing transforming spaces come from Hong Kong. And this apartment by HK’s LAAB Architecture might be the most most versatile transforming space we’ve ever seen. The owners, Michelle and Andy, were dead set on living in HK’s extremely expensive Central District. Rather than cashing blowing all of their money on a larger place, they decided to go small and employ smart design to fulfill on their desires. And their desires were many: They wanted a full kitchen, large bathtub, home cinema, gym, cat friendly spaces (there are three) and plenty of storage. All in 309 sq ft.

How LAAB fulfilled on the brief must be seen to be believed. Some of the highlights are a tub that doubles as a seating area, an entertainment center that slides out of the wall, sleeping for 4-6 and, perhaps most impressive, a network of “catwalks”–tiny corridors for the cats to play in. The architects said the build necessitated 3mm tolerances to make everything work. Needless to say, most everything is app controllable. 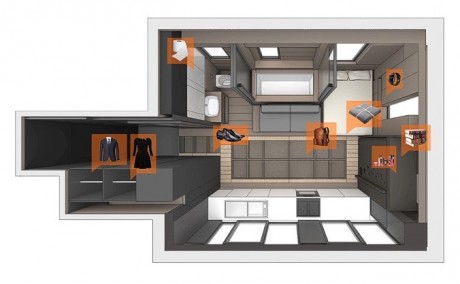 Central to making the apartment work was the “Form Follows Time” philosophy, where the space morphs according to the time of day and its attendant use. It’s a concept we’ve long espoused here and on we hope gains traction in architectural thought. LAAB’s fusion of high tech, high design, amazing craftsmanship and lofty thinking has truly set a high watermark for what’s possible in space small and large.