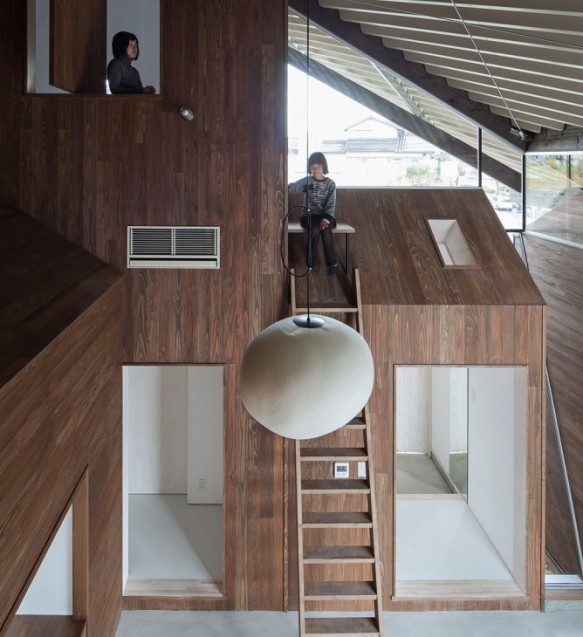 Fitting a large number of people under one roof comfortably and with privacy can be a tricky proposition. Japan’s y+M Architecture took an interesting approach in achieving this with their Rain Shelter House. The home places separate micro-buildings under one large canopied roof, creating several autonomous districts in one small footprint. The setup, which kinda resembles an extremely small village, houses a couple, their two children and a grandmother.

The space has four bedrooms, with the grandmother’s residing in a separate building. The second floor two kids rooms are accessible via stairs or a ladder off the inner courtyard.

The region where the house sits gets a lot of rainfall and snow, which the roof’s sharp slope is designed to shed; its main slope faces north, where most of the biting winds come from. Large glass panes further insulate the courtyard from winds and openings on the side of the structure let in oblique lighting. We’d imagine the courtyard makes a great outdoor play-space on inclement days.

What fascinates us most about the space is how it reimagines how the family home can function. We could imagine a similar structure working well for a space occupied by two or more families, striking just the right balance of connection, privacy, all inhabiting a small overall footprint.