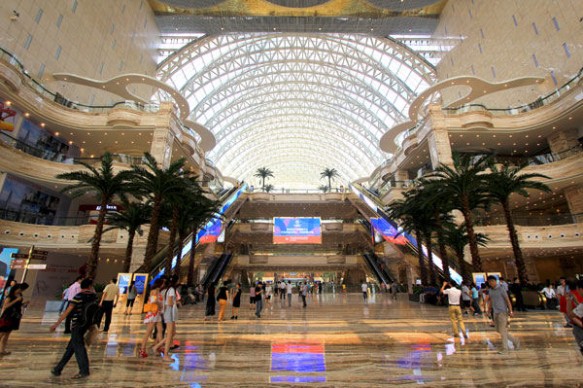 What has 18,000,000 square feet of floor area, an artificial beach and a Gap clothing store? If you answered, the New Century Global Center in Chengdu, China–now the biggest building in the world as measured by floor space–you’d be correct.

Buildings like the Global Center seem to demonstrate the Chinese’s knack for going too far. Some might even argue they take sustainable building too far. But for all of the finger pointing, the fact remains that the Chinese per capita carbon footprint is a fraction of that of most western nations. In 2009, Americans produced 17.2 metric tons of CO2 per capita; for China, that same figure was 5.3 metric tons (a figure that is admittedly on the rise).

Moreover, as a Guardian article by George Monbiot pointed out a few months ago, many “developed” nations’ emission reductions are only possible with overseas emission increases. He took the example of the UK, who boasted a 19% carbon emission drop between 1990 and 2008, as measured within its borders. When emissions were measured to include consumption behavior and the embodied emissions therein, the UK posted a 20% increase–a fact that has a big role in the increasing carbon emissions within China’s borders.

What does this all have to do with the price of tea…we mean, the size of a mall in China? It’s a reminder that in our increasingly connected world the excesses of one country often go lockstep with another. And as distasteful as we might find what is, for intents and purposes a gargantuan shopping mall located halfway around the world, it’s also a reminder that we take responsibility for how we consume at home.