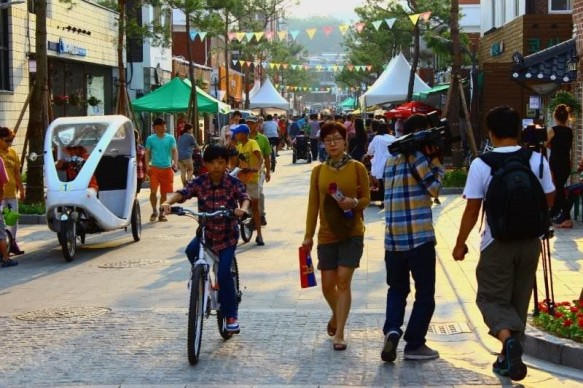 Where The Streets Have No Cars

It’s funny how transparent cars are in today’s cityscapes. They’re a given and just blend into our field of vision. But what if every car on our streets disappeared? What would those streets look like? How could we use them differently? That was the query one South Korean neighborhood asked as well as the challenge it took on. In 2013, as part of EcoMobility Festival, Haenggung-dong, a neighborhood of Suwon, blocked 1,500 registered cars from its city for one month. Residents were asked to walk, bike, take public transit or car-share instead. The experiment was the subject of a recently released book, Neighborhood in Motion: One Neighborhood, One Month, No Cars. 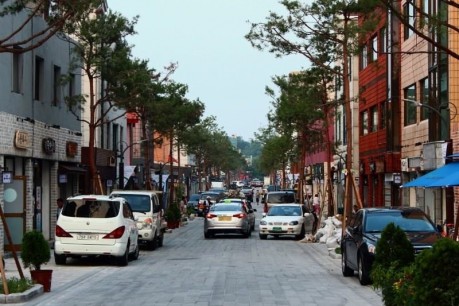 The festival and experiment were designed to get people familiar with a future with scarce resources. The book goes into every aspect of the project–from finding a city wacky enough to try such a bold experiment to its aftermath. From a review of the book in Pop-Up City:

The book intriguingly shows how an urban district changes within the car-free month: from busy, car-oriented streets to a more attractive neighborhood that offers a higher quality of life due to less smog and more possibilities to use public spaces. Cafés were able to extend their seating onto the sidewalk, children were able to play in the streets safely and people started to play nightly games of badminton in the streets.

Sounds good to us.

The 2015 EcoMobility Festival will be in the Sandton neighborhood of Johannesburg, South Africa–an area where not everyone is on board with ditching their cars for a month. What’s great about the festival is that overcoming protests, and perhaps winning over some hearts and minds in the meantime, is far more feasible for 30 days than forever.