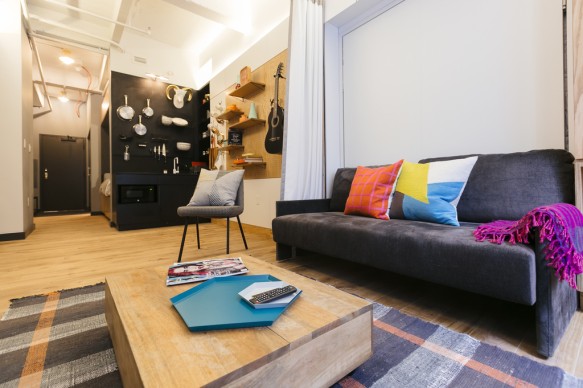 A while back we reported about WeLive, the residential arm of the coworking giant WeWork. That post gave some of the spec’s for their Crystal City project, which converted a 12 story office building outside of DC into massive complex filled with micro apartments, communal recreational and coworking spaces. Well, unbeknownst to many, WeWork was developing another project at 110 Wall Street in Manhattan’s financial district (also the site of an existing WeWork coworking space). The project will eventually house 600 folks on 20 floors. They recently announced a beta launch at the building, which will house 80 WeWork members in 45 units.

Similar to Ollie in New York, The Collective in the UK, CommonSpace in Syracuse and other such developments, WeLive (not the official name for the record) seeks to create a whole universe for its residents. The pictures released by WeWork show handsome apartments designed by ARExA Architecture, whose principal and Creative Director Darrick Borowski designed one of our favorite micro-apartments. The interior incorporates Resource Furniture space saving beds. There will be studios and one and two bedroom units. The pictured unit is a two bed studio separated by a curtain (a setup that will probably not appeal to everyone). 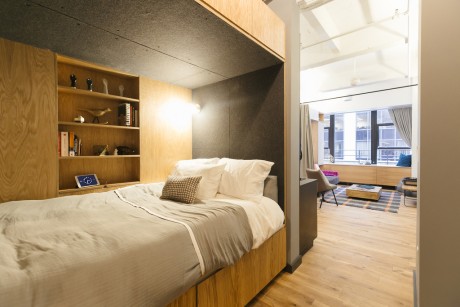 The private units will be supplemented by common areas on every floor. There will be social directors, who, according to Fast Company, “Will help plan Sunday-night suppers, game nights, karaoke, and fitness classes.” Additional services like wifi, cable and cleaning are also included. You could, theoretically, never have to leave the building if you so chose. 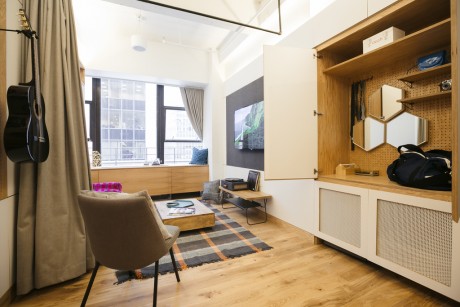 The whole concept raises a somewhat thorny question: would having your coworking space share a building with your apartment be a good thing? Or might it create a somewhat insular existence, where work and and personal lives have no division, where you run into the same (somewhat homogenous) crowd day in, day out? These are somewhat academic questions–literally. What WeWork is doing is creating something akin to an academic campus, albeit with a professional twist, a model that seems to work just fine. Which is good, as WeWork sees their residential endeavors making up 21% of their revenue by 2018.