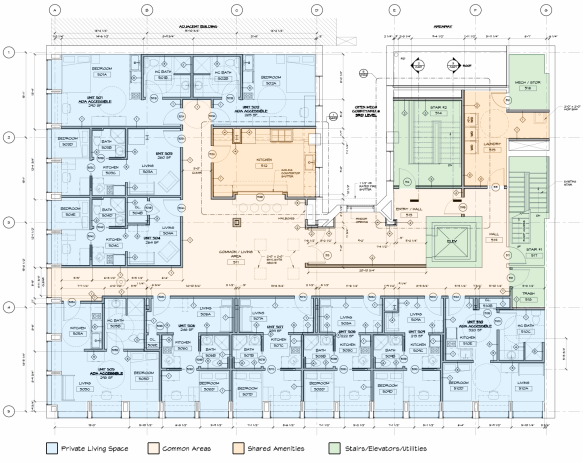 I’ve written here about several all inclusive housing developments that are aimed at so called Millennials. Ollie in New York. WeLive in DC. The Collective in London. These places combine small individual living spaces with ample common spaces including lounges, movie rooms and co-working spaces–all resulting in a very social, low-fuss living experience. While these developments are exciting, their locations make them untenable for many Millennials. “Affordable” in NYC, DC and London is, for many, still god-awfully expensive. Which is why I’m excited about a new housing development called Commonspace in Syracuse, New York–it has many of the shared living qualities of the aforementioned developments, but it is located in a city where property values are still within reach for folks who aren’t pulling in $200K straight out of Wharton. 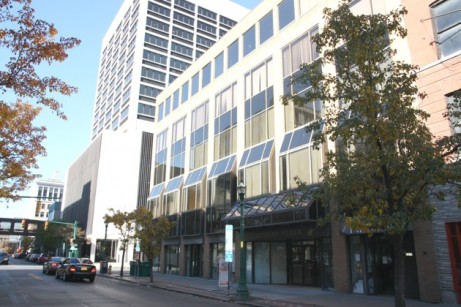 Commonspace is an extension of CoWorks, a coworking space opened last February by fellow upstaters Troy Evans and John Talarico. Like WeLive and the Providence Arcade, Commonspace is a retrofit of an older building–in this case, a pretty unassuming five story office building. The first floor is retail, while the second floor houses CoWorks. The third floor is used as rented out office space, while the top two floors will house Commonspace, which has 21 private micro-apartments. Each unit will have its own kitchenette, bathroom and is located toward the outer edge of the building so they have their own window. Units will be no larger than 300 sq ft and will include furnishings designed to maximize the space like built-in beds that flip up to access storage underneath, floor to ceiling storage and more.

Split between the fourth and fifth floors are the common areas that include a professional kitchen, lounge, game room and screening room. Residents will also be able to access the downstairs coworking space. There will be an onsite social coordinator as well as online community network to keep people connected. Evans told me the idea was to make the building into a neighborhood.

Commonspace’s innovative housing model is not necessarily original. “People are doing this in bigger cities,” Talarico told me. But locating it in a medium sized, “second tier” city is. “We want keep people here. A lot of people [to whom Commonspace will appeal to] are remote workers. They can see how they living great lives on smaller incomes.”

Syracuse is seeing a bit of a rebirth, according to Evans. Population is starting to climb after years of stagnation and decline. And much of this growth is happening downtown, driving rents up. An average one bedroom goes for around $1400. Rents for Commonspace units, which will be furnished and include utilities and even access to the coworking space, will start around $800. This low cost coupled with a built in network of potential collaborators is ideal for people who might be starting a new venture–or want a fun place to live that doesn’t cost a fortune.

Evans and Talarico would like to expand the idea into Rochester, Utica, Ithaca and other upstate New York cities. Evans said that they want “to keep young people part of social circle so they want to stick around.” With a combination of dynamic, social living and affordability, I think they might just achieve their goal.

They expect renovations to be complete in five to six months and preleasing has already begun. More info at Commonspace.io.