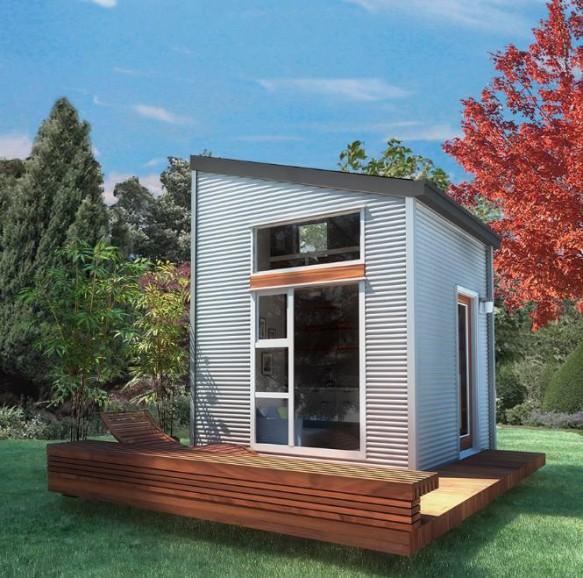 A new venture called NOMAD Micro Homes has designed a house that features all necessary living functions in a sleek, 10′ x 10′ package. The tiny house can be adapted for PV cells, rainwater collection and grey water treatment, giving it the capacity to go off-grid. The base model will be a mere $25K, and throwing down $3K extra will get you kitchen appliances. Vancouver-based NOMAD has a crowdfunding campaign on Indiegogo to help raise money to bring it to production.

NOMAD has big ambitions for the tiny house according to their website:

NOMAD’s goal is to reduce consumerism and focus on an affordable and sustainable housing option for the largest portion of our society: hard-working individuals who can’t make ends meet due to the high cost of living.

In the video below NOMAD founder Ian Kent describes how he sees the little home as more than a place to live. He sees it as redefining the idea of home, free from materialistic/consumer cultural constraints.

He also thinks the home’s design will inspire changes in its owner, as he told the Global News Canada:

Your consumerism would drop, because you wouldn’t be able to fit in things that people usually buy. You would become very efficient and that’s going to be a forced savings in your bank account. Plus, you are going to become a fantastic recycler and you are going to come up with new methods of recycling, because you can’t fit garbage in your unit.

Whereas the tiny houses popularized by Tumbleweed Tiny House Company are quite DIY, NOMAD will be prefabricated and flat-packing for easy shipping anywhere in the world. Its simple assembly and low price would make the tiny house format available to people who might not want to build their own homes, of which there are many.

Kirk sees this as a possible solution for many overpriced housing markets–e.g. Vancouver, which boasts some of North America’s highest property values. There might be a snag with that plan however: Vancouver has bylaws that restrict building homes under 320 sq ft according to Global News.

Therein lies the eternal question with tiny houses: where do you put them? A tiny, off grid house is very eco friendly if you source food and make your living off grid; if not, we suspect a nice studio in a city center with its minimal transportation needs will be far more efficient. And as we saw with the Occupy Madison Build and Boneyard Studios tiny houses, putting homes that are not on the grid in many cities is illegal.

That said, our hats are off to the NOMADs. Should they get their project funded, they stand to make tiny houses accessible to larger populations. NOMAD’s pre-made homes might take the movement one step further from its current place at the fringe of society. Perhaps with a growing tiny house movement, legislation and society can become more hospitable to these innovative little homes.