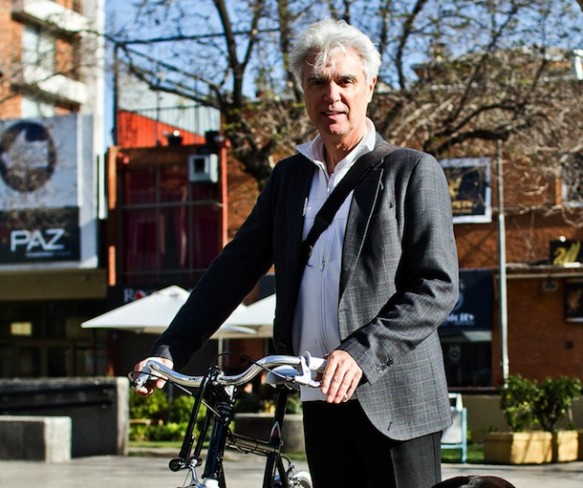 A reader tipped us off to a recent article by David Byrne entitled “Will Work for Inspiration.” It’s a rambling treatise on the past, present and future of New York City (though much of what he says could be applied to cities like San Francisco, London and Paris). He sees the city as a place increasingly economically inhospitable to the middle-class, artists, musicians, actors, dancers, writers, journalists and small business people. He writes, “bit by bit, the resources that keep the city vibrant are being eliminated.”

His piece is not a simple admonishment of a city’s progressive move toward affluence. He tracks his own relationship to the city to illustrate the complexity of the topic. In the 70s and 80s, when Byrne first arrived in NYC, crime, danger and poverty were mainstays of city life. Much of the cultural explosion that occurred during that time, was, at least to some extent, facilitated by “cheap rents in cold-water lofts without heat.”

We might romanticize hanging out in a freezing Soho loft listening to the people who would one day be the Talking Heads, but Byrne is not so nostalgic. He explains:

As one gets a little older, those hardships aren’t so romantic—they’re just hard. The tradeoff begins to look like a real pain in the ass if one has been here for years and years and is barely eking out a living.

He doesn’t believe that “hardship breeds artistic creativity.” For example, he finds “the drop in crime over the last couple of decades refreshing.” But he does note a growing lopsidedness in New York’s cultural vs financial priorities:

The city is a body and a mind—a physical structure as well as a repository of ideas and information. Knowledge and creativity are resources. If the physical (and financial) parts are functional, then the flow of ideas, creativity and information are facilitated….The physical part of our city—the body—has been improved immeasurably. I’m a huge supporter of the bike lanes and the bike-share program, the new public plazas, the waterfront parks and the functional public transportation system. But the cultural part of the city—the mind—has been usurped by the top 1 percent.

The conflict between culture and affluence is an ancient one, yet it somehow seems to be kicking into high gear lately. A recent Gothamist article called “Ask A Native New Yorker: How Guilty Should I Feel About Being A Horrible Gentrifier?” posits that displacement of established cultures by affluence–i.e. gentrification–is pretty inevitable. Author Jake Dobkin says “As long as people want to live in good neighborhoods and pay cheap rents…gentrification will continue.”

He also notes the inherent hypocrisy of criticizing gentrification:

All New Yorkers are gentrifiers. Say you’re of Jewish extraction: your forebears gentrified some Irish right out of L.E.S. around the turn of the century. Or maybe you’re Irish, and your ancestors were responsible for gentrifying the marginal land around the Collect Pond in Five Points. Or maybe your family goes all the way back to New Amsterdam and Peter Minuit, the original gentrifier, who gentrified the poor Native Americans right off Manhattan island.

Dobkin writes a compelling essay, concluding “that while gentrification is inevitable, its character is not.” Many small choices by the gentrifier help make the process resemble mergence more than replacement of existing cultures (also read this response to Dobkin by another native New Yorker that lends more to the argument).

But Byrne doesn’t seem to be writing about standard-grade gentrification. He is basically saying that the historical gentrifiers–e.g. artists like Byrne–can no longer get a foothold in the city. In other words, gentrification has become off limits to all but the super rich.

Byrne ends with more questions than answers. He asks, “Can New York change its trajectory a little bit, become more inclusive and financially egalitarian?” He thinks that it can and sees many of the “physical improvements”–byproducts of the city’s affluence–as a great complement to cultural improvements. But how specifically is something he doesn’t deign to say.

We don’t know either. Like Byrne, we still see New York City as one of the best places to live in the world, but also one of the most expensive. We think increased density, coupled with deregulation of building small, will allow for more, less expensive housing, creating one possible path forward.

If you know how New York–or any thriving city for that matter–can marry culture, affordability, safety and infrastructure, can respect existing cultures, cultivate vibrant new ones, all while maintaining a healthy, sustainable economy, let us know in our comments section (let Bill De Blasio know as well).