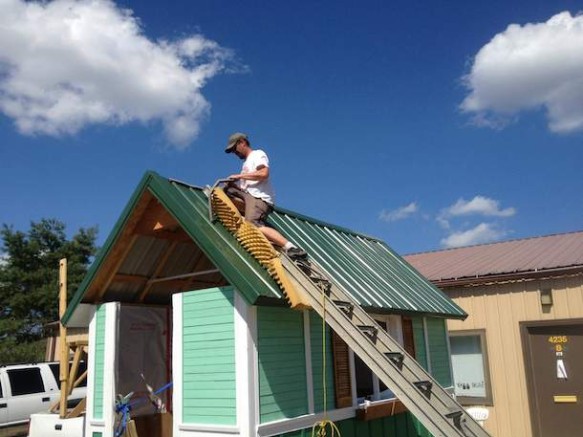 Tiny Solution to the Big Problem of Homelessness

Add Madison, Wisconsin to New York City and San Francisco to cities with major housing shortages. The 240K person midwestern city boasts a housing vacancy rate of 1.8%–four times lower than the national average. And like many cities with too few homes for too many people, a growing homeless population has emerged. A project called Occupy Madison Build has a possible solution for housing the 3K or so homeless Madisonians: build them tiny houses.

OM Build works much the way the UK project we looked at while back does, affording its residents the chance to develop practical building skills while simultaneously constructing their future home. Bruce Wallbaum, a board member of OM Build, told Al Jazeera America, “You [potential tiny house dwellers] go through an application process, you start work in the shop, you start earning hours toward a tiny home and eventually you reach a point where you’re in line to get a tiny home.”

OM Build faces one not-so-tiny bureaucratic challenge: Madison has a 48 hour cap on how long a trailer can be parked in the same spot. Organizers are hoping to get this code changed as well as rely on parking within one of the numerous faith organizations that have expressed approbation of the program.

OM Build is a registered 501c nonprofit organization and all materials and labor are donated. Much of the lumber for the tiny house comes from reclaimed shipping pallets (a recent Pallet Palooza sought to dissemble enough pallets to provide lumber for the second OM Build house). 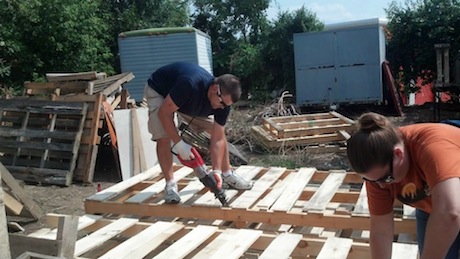 The first 98 sq ft OM Build tiny house is set to be completed any day now, with its builder/residents Chris Derrick and Betty Ybarra ready to move in. OM Build hopes to have eight more completed by the end of the year. It might not be a perfect home or a perfect plan, but it is a home and a plan. As a commenter succinctly wrote on Al Jazeera about the project, “If you don’t like it, try being homeless. Have compassion.”