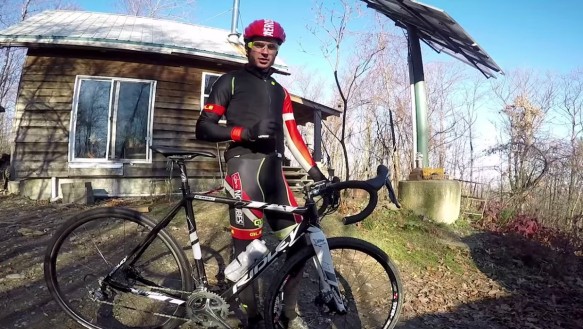 Dan Timmerman is an American. He makes his living professionally racing cyclocross. If the combination of those two statements doesn’t impress you, you probably don’t know much about cyclocross. The sport is like steeplechase on a bike, and though popular in Europe, it is still pretty niche this side of the pond. The reason Timmerman can make his living like this is not because of the millions he makes clearing hurdles on his Ridley cross rig. He does it because he and his wife have reduced their living expenses to such an extent that they can do what they damn well please.

Five years ago, the couple bought a cabin on a 10-acre property in rural New York. The cabin is owned outright, so housing costs are negligible. It’s off-grid, relying on solar power, which is stored in batteries when the sun’s not out. Heat and cooking fuel come from chopped wood. Water comes from a well. Poop is composted. They raise chickens, grow veggies and Dan does some hunting, though he says most of their food comes from the grocery store. They have cellphones, which double as their internet connection for their laptops. Paying for the cell phone bill is their only real “bill.”

Beside the profoundly low overhead, their setup allows them to be immersed in nature–one of the main motivations for moving there. “”We have direct access to nature—it’s right there…We’re connected to it every day, not just sitting there observing it,” Timmerman said (full interview on video above).

There are some downsides to their setup, namely that they are pretty remote, which forces them to drive quite a bit. His wife Sam drives 18 miles to Ithaca to work and the nearest town is eight miles away. But Dan says they have a community in the woods, and even though they talk about moving further in, the advantages of having freedom to do what they want and being so close to nature outweigh the disadvantages.

Via Business Insider and DirtWireTV