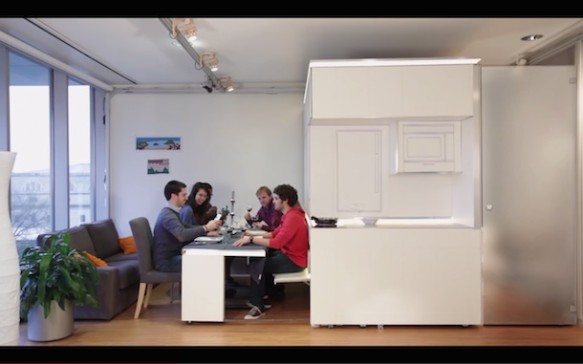 Two years ago, we reported about MIT’s CityHome. The concept presented a technologically-enhanced way of mating residential interiors with resident needs. In the way someone enters personal preferences for an online dating site, a resident would list his or her needs in CityHome’s software and CityHome’s proprietary furniture–much of which was modular and moving–would configure itself to suit that need in any given moment. The concept, which to the best of our information was never build, was based on an 840 sq ft floorplan. MIT’s Changing Places Group, the team behind the project, said this “very small footprint” (their words, not ours) could function like a space three times as large.

We hadn’t heard anything from CityHome until the other day, when Fastco Design reported about the CityHome 200 sq ft. The newer, smaller version shows vestiges of the original concept, but takes space saving much further. 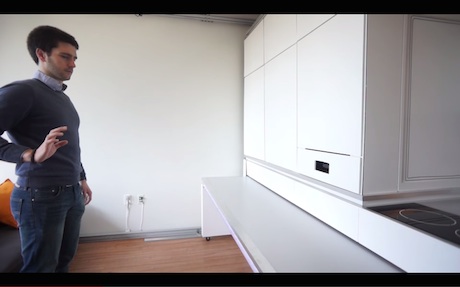 CityHome 200 sq ft centers around a central module that can be plopped (our word, not theirs) in the middle of a tiny apartment. The module contains a bed, dining table, desk, kitchen and storage. The unit contains numerous sensors where body and voice commands enable you to control various functions; you can pull the bed out with a wave of a hand or activate disco lighting if the sensors detect the smell of cheap cologne (the latter function is unverified). 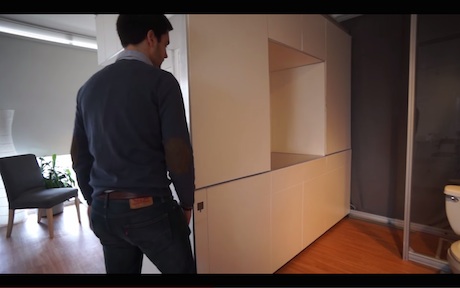 The whole module easily slides back and forth. In one position, you can expand the size of the bathroom to reveal a shower; in the other position you can take the shower’s square footage and give it to the living area.

As with other spaces we’ve looked at in the past, we wonder about the longterm feasibility of a space that’s so tech-dependent. What if the bed’s motor breaks? Will you have to sleep on the floor? But the basic design would be super practical even in full-on manual mode.

According to Fast Company who spoke with project lead Kent Larson, the project is not just a far-flung concept, and there are plans of bringing it to market. Of the expense of such an elaborate architectural gadget, Larson says, “At $1,000 per square foot in Boston [roughly the same, or a little less than NYC and SF incidentally], the extra cost of technology is trivial compared to space saved for a furnished apartment.” Makes sense to us.