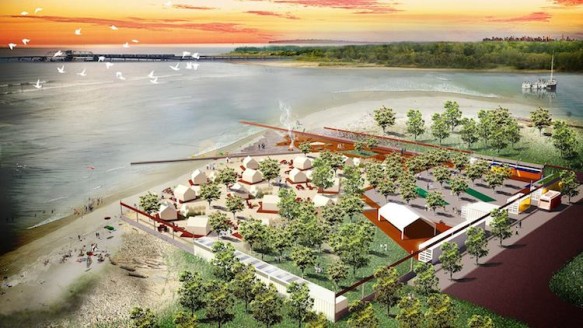 As summer descends upon the northern hemisphere, thoughts–and bodies–start to run to the beach. But for many, expensive hotels and house-shares make anything more than a day-trip seem a bit out of reach. But in days of yore, vacationing by the shore was not the exclusive domain of the monied few. There were many spots where any budget would provide simple accommodations by the shore. This is the idea behind a Kickstarter project called Camp Rockaway.

The idea for the project started germinating a couple years ago when its creator Kent Johnson moved to the New York City from the Catskill mountains. He needed a natural outlet to replace the mountains and rivers that had previously been outside his door.

“I started surfing and discovering all the New York City beaches,” Johnson told us. Rockaway Beach, on the eastern shore of the Rockaway peninsula, which sits between Jamaica Bay and the Atlantic, is a favorite surf spot.

“I have a tendency to geek out a bit and I read up on the history of Far Rockaway [the easternmost section of the Rockaways].” While parts of Far Rockaway have a reputation nowadays for being crime ridden, Johnson said the peninsula was the “playground for the rich and famous” at the turn of the last century. At one point, the area boasted the world’s biggest hotel. 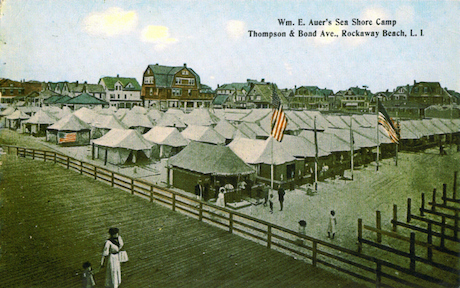 Besides mansions, fancy hotels and yacht clubs, the Rockaways hosted far less patrician accommodations. “There were the bungalow colonies, which were owned, but there were also tent colonies for more transient populations; these were the least expensive way to spend the night.” It was the latter category Johnson got most excited about. He continued to geek out on the topic, researching the history of these colonies, and from there the dream of Camp Rockaway was born.

“My main experience of the Rockaways is seeing it early in the morning, which is beautiful as can be–watching the birds and the dawn break over the ocean.” But for many who live and work in the city–people like Johnson–living amongst this beauty year-round doesn’t make sense.

If Johnson gets his way, Camp Rockaway will provide New Yorkers a minimal, social, clean place to crash on the shore when they might otherwise have prematurely schlepped home from a glorious day at the beach. Guests will stay in clean, safari-style tents with crisp linens and real beds. There will be private fire pits, outdoor showers and hot-tubs overlooking Jamaica Bay (don’t use the word “glamping” around Johnson).

Johnson, who runs a NYC-based design/build firm, is trying to raise $50K for the development of the first site through a Kickstarter campaign, but he’d eventually like to expand the idea to other beaches. “I want to create something that is easy and not exclusive,” Johnson said. We think the idea is great and look forward to hopping on the subway for our own vacation.