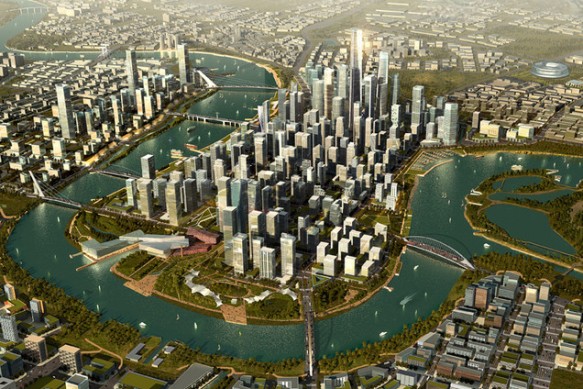 Ah the dream of creating a perfect city–include the best, leave the rest and all you have is perfect living conditions. History is dotted with success stories: Brasilia, Arcosanti, Celebration, Florida–places that testify that making a great place to live is really a matter of connecting dots and constructing a few buildings.

Aforementioned examples notwithstanding, it’s actually tough to make a city from scratch (who’d a’thunk?). Most successful cities get that way because: 1. they are blessed with great geography (NYC, Singapore, Hong Kong, etc); 2. they evolve over time, adapting to their populations’ and eras’ particular needs; and 3. their evolution has created cultural and aesthetic diversity that makes them resilient and interesting.

But don’t let the difficulty of city-building make you think people ain’t gonna try to do it. They do and they are.

Yujiapu Financial District is one such example. It’s a city being built from scratch in China. It is being made in the likeness of Manhattan, replete with its own Rockefeller Center and One World Trade Center knockoffs. It even has a couple big NYC real estate heavyweights like Tishman Speyer and Rose Rock Group helping construction along. Located about 2.5 hours southeast of Beijing and built on a marshy former fishing village, the city is meant as a high-density haven of global finance, littered with skyscrapers placed along gridded streets…just like Manhattan. 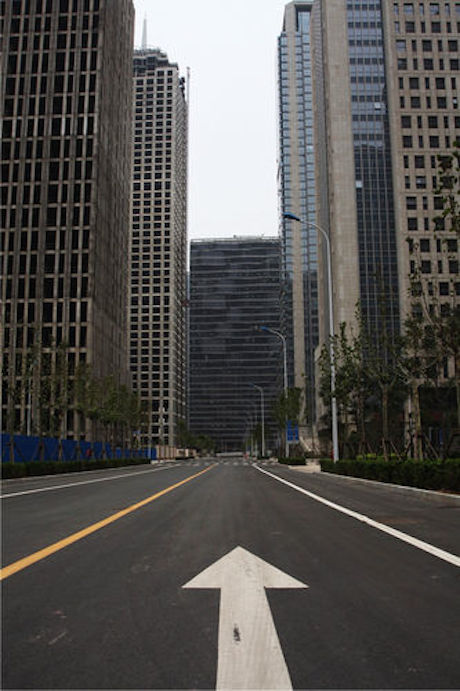 Unlike Manhattan, a city whose modern incarnation started with a small Dutch Settlement 400 years ago, Yujiapu began construction in 2008. Yujiapu’s first building opened two years later and completion is expected for 2019. Also unlike Manhattan, who boasts a population of about 1.7M people, Yujiapu is virtually deserted. And the chances of changing that and replicating Manhattan’s hustle and bustle aren’t looking good.

The city was conceived in the heyday of China’s economic boom. In particular, Yujiapu is near to Tianjin, China’s fourth largest city, whose economy seemed unstoppable ten years ago. But as China and Tianjin’s economy slowed (the latter experiencing a 7% decrease in economic growth in last four years alone), new construction, fueled by hopes of ceaseless economic growth and massive amounts of debt, no longer had occupants. Now buildings like the Country Garden Phoenix Hotel (pictured below), designed to be Asia’s largest, sit fallow along Yujiapu’s untravelled streets. 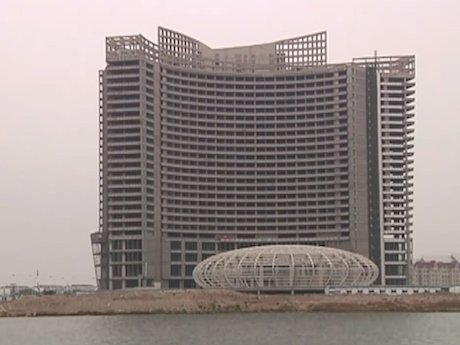 We at LifeEdited love our cities. We love walking and biking everywhere. We love the serendipitous encounters that seems to happen all the time along city streets. But making a great city, so far as we can tell, is not a paint-by-numbers proposition. It’s a mutual evolution of planning, place and population. Though it would seem to lack most of those things, we wish Yujiapu well–mostly because that’s a lot of resources for something that might not be used.

Via Bloomberg News and Vagabond Journey