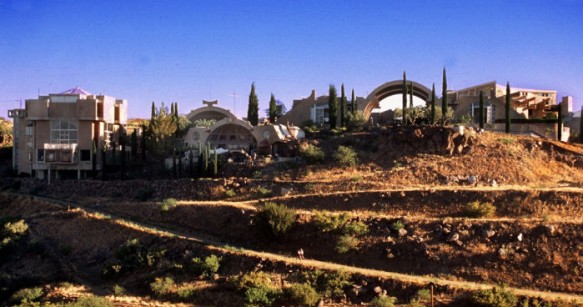 Many, if not most major cities have been around for some time. NYC dates from the 17th Century, San Francisco from the 19th, London from the Roman Empire. As such, these and other cities are burdened with the unwanted inheritances of past lives: ancient and crumbling architecture, archaic street grids, sprawled-out and mass-transit-proof city plans and so on. Arcosanti, an urban experiment built on the tabula rasa of the Arizona desert, was to be a city without a past–a city that would succeed because it was guided and designed by principles, not ghosts.

Arcosanti first broke ground in 1955 in a location 70 miles north of Phoenix. The project was the brainchild of Italian-American architect Paolo Soleri. It was meant to be a living embodiment of the concept he called arcology, the meeting of architecture and ecology. The city sought to adhere to design principles that would perfectly alloy the best of the city (density, social living), country (access to nature) and sustainable living (resource conservation). Here is an example of the “proximity” principle from the Arcosanti site:

Arcosanti’s design provides an efficient and lively urban environment by physically connecting a mix of activities such as living, working, learning and leisure. In this way efficient and equitable access to most of the city’s amenities and are available within minutes. Although life in such a setting will be intense and exciting, at times it could be taxing on individuals. For this reason, Arcosanti also features immediate access to open space and nature, to provide opportunities to decompress. 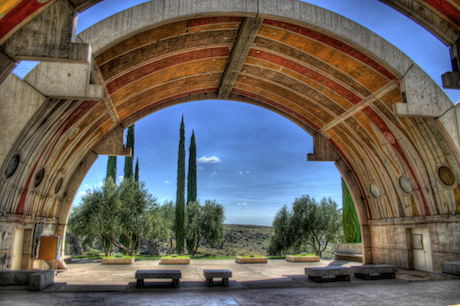 The town occupies a space of 25 acres and has 13 buildings, most of which were built between 1955 and 1974. The architecture, which was to embody the principles and bring people together, is littered with common spaces that look like a Roman forum as interpreted by the set designer of Battlestar Galactica (the one from the 70s).

Over the course of its life, there have been anywhere from 50 to 150 people living there at one time, fluctuations attributable to student populations who have used the town as a research site.

The town was intended to eventually house and support 5K people. That intention, for a multitude of reasons, was never fulfilled. Some of those reasons, like a spartan, toilsome daily routine, and a cement building composition that baked in the sun and froze in the winter, were specific to Arcosanti. Others were characteristic of many total cities (e.g. Brasilia), where the autocracy of principles and a singular, exclusionary vision left little room for the cultural and formal flexibility that makes successful cities succeed.

Today, the town’s main “industry” is handmade bells. As of a couple years ago, there were 56 full-time residents. Arcosanti still hosts students and tourists (you can book one of their rooms through their website). But notions of Arcosanti as a model for the future have mostly evaporated like water in the desert (who knew making a city could be so hard?). All that said, we love a good experiment and think Arcosanti was, and to some extent is, a bold one worth knowing about…if not living in.