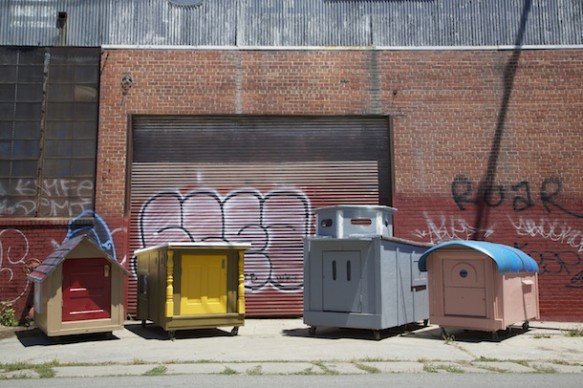 Check Out These Scrappy Little Homes for the Homeless

“One man gathers what another man spills.”

Sculptor Gregory Kloehn wanted to do more than make art that sat in rich folks’ homes. He wanted to make useful stuff–made from unused stuff. He started a few years ago making houses from used shipping containers, both his own home and then for others. And then one day a homeless couple stopped by his studio asking for a tarp. He had been working on a small structure about the size of a sofa that had a “kitchen,” water tank and small receptacle for waste. He gave this tiniest of houses to the couple, which led him to building nine more, all of which he has done free of charge.

Like the first house, they are all tiny–little more than a covered bed in most cases. He constructs them largely out of illegally dumped trash found in the industrial section of west Oakland, CA where Kloehn lives much of the year. Their foundations are usually made from old shipping pallets, which are attached to casters for easy porting.

The houses, though tiny, represent a significant improvement to the status quo, where options typically include sleeping on the street or in dangerous homeless shelters. Not all of them have faired well: the first home was firebombed, one was stolen and another was sold for $80 to be used as a doghouse.

Kloehn does have a larger purpose for the homes. He has started the Homeless Homes Project, which through the use of scrapped materials, “strive[s] to diminish money’s influence over the building process.” He is looking for both donations and materials. He held workshops this last spring where homeless populations can build their own structures.