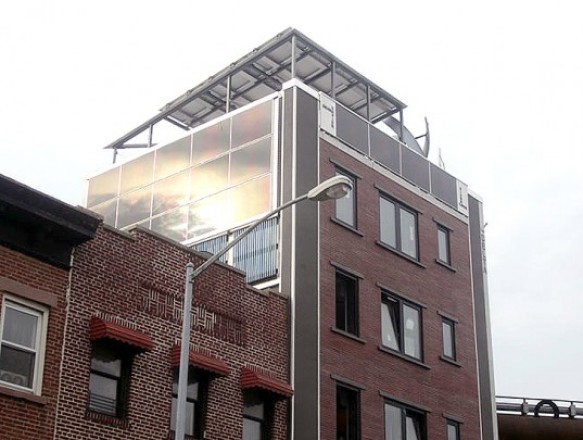 Home Goes Off Grid in Brooklyn

We don’t talk too much about “green” at LifeEdited for a couple reasons: 1. It’s the 21st Century and it should be a given in our conversation, and 2. Because small is green. All things being equal, a 500 sq ft home will be twice as efficient as a 1000 sq ft one.

The problem is all things are not equal. In New York City, for example, a good portion of the housing stock is old with crummy windows and connected to an inefficient electricity grid, so even though housing units are significantly smaller than the rest of the country, some of that advantage is lost in these inefficiencies.

A new building in Brooklyn, NY called the “Delta” is addressing these issues directly. The builder Voltaic Solaire has sheathed the building with photovoltaic cells and topped it with wind turbines to make it “net-zero”–i.e. it can create all the energy it consumes. Each of the building’s 5 units will be a LifeEdited-approved 450 sq ft and feature murphy beds and folding tables. It will be small and efficient.

The company is working on retrofitting a classic Brooklyn brownstone that will generate 18Kw/year–again, enough to power the building and possibly then some. While building new is often a great way of going green, using existing structures reduces embedded energy because you are using stuff that already exists.

Cities are very conducive to living an edited life. They are walkable, make sharing easy and support high-density living. But we don’t need to stop there. Voltaic Solaire and others are  showing how we can make cities even better.

If you know of other movements like this one, let us know.