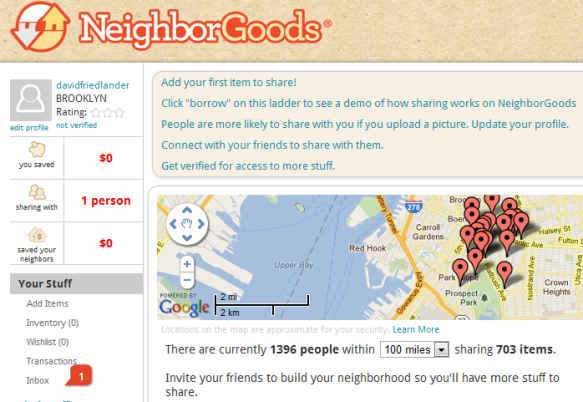 Take Your Neighbor’s Stuff Without Getting Arrested

Long ago people didn’t have a lot of personal possessions. Not everyone had their own power-drill, cookie pans or tripod. And because the nearest Target was 30 years away, rather than not assembling that desk, eating raw cookie dough or shooting blurry shots, people used the only store around: their neighbors.

Well those days might be upon us again…but better. Rather than bugging your neighbors, services like Neighborgoods, Snapgoods and Share Some Sugarconnect you online with people in your area who have the stuff you need. Neighborgoods is free and has a pretty deep inventory of stuff (for our Brooklyn-based author at least); I found a Wii, a glue gun and a cat carrier–all things that might come in handy once in a while, but hardly necessary all the time. Share Some Sugar charges a nominal rental fee for household items, while Snapgoods focuses on high-tech gear; e.g. I found a CAD M179 Large Diaphragm Studio Condenser Microphone with Shockmount (Continuously variable pickup pattern!). I have no idea what that is or does, but am sure $9/day is a good deal.

We live in an age of abundant and cheap consumer goods. So much so that we end up buying stuff we don’t really need. But as Dave Bruno put it,”Stuff is not passive. Stuff wants your time, attention, allegiance. But you know it as well as I do, life is more important than the things we accumulate.” With aforementioned sharing systems, you can have the stuff you need, but only when you need it, allowing us to focus on other, more important stuff.