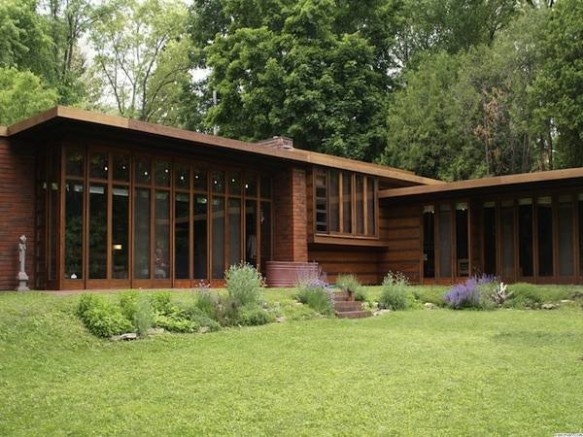 At a lecture given to Princeton students in the spring of 1930, Frank Lloyd Wright described the interior of the typical American home as being a stomach “ever hungry – for ever more objects – or plethoric for over plenty.” Not long afterwards, he began a series of experiments in small home design intended to tackle this overindulgence of the typical suburban home.

Known as Usonian houses, the designs were small, affordable, and built with materials that made sense in their environment. Beyond simple practicality, Wright also wanted to show that small spaces could be achievements in aesthetic beauty. Examples of these homes built between the 1930’s and 50’s display a startling range of efficiency-oriented features that make the most of space with innovative design – and all at a time when most architects were building as large as possible.

The best elements of Usonian architecture can be seen in the pair of houses that Wright designed at different times for Wisconsin journalist Herbert Jacobs and his family. The first of these houses was designed and built for $5,500 – a modest sum even in today’s dollars, and affordable on a journalist’s salary. The two-bedroom family house is built on an L shape, with a living area along one axis and bedrooms along the other. Where they intersect, and in close proximity to all areas of the house, is a small bathroom and an area for cooking and cleaning. In this 1,500 square feet of space is contained everything required for an ordinary sized family to live comfortably – without the space for the unnecessary accumulation of “over plenty”.

Almost immediately visitors began arriving to admire the Jacobs’ home; a testament not only to the practicality of the plan, but also to its beauty and broad appeal. The Jacobs’ claim that so many visitors arrived to view the house that when they began charging a 50-cent fee for tours, they were able to recoup the cost of the cost of their architect’s fee by the time the house was sold.

When the family relocated, they again contacted Wright to build their next house, which would prove even more ambitious in its aims. While still remaining small in scale, the second Jacobs house was also built to utilize passive solar heating via a roof that lets in sunlight during the cold winter months when the sun is low, and blocks it during hot summers. The rear of the house is burrowed into the prairie hillside; on the opposite side, south facing windows curve around a central outdoor garden that is sheltered from the strong winds that blow around the house.

Perhaps what is most significant about the homes is the foresight required to create these early solutions to oversized and inefficient housing. The spaces are large enough to be quite comfortable, but not so large as to facilitate the excess consumerism of most suburban households. And by building with local materials in a way that complements rather than conquers the landscape, these Usonian homes also create a more harmonious relationship with the spaces around them. While these homes do not provide solutions to all of the problems facing modern housing, they do show how appealing and efficient living spaces can be created even within relatively modest means.

Guest contributor Brian Bruegge studies Journalism at Fordham University and has had work published for both Fordham’s paper and Bill Baker’s blog on the WNET website.