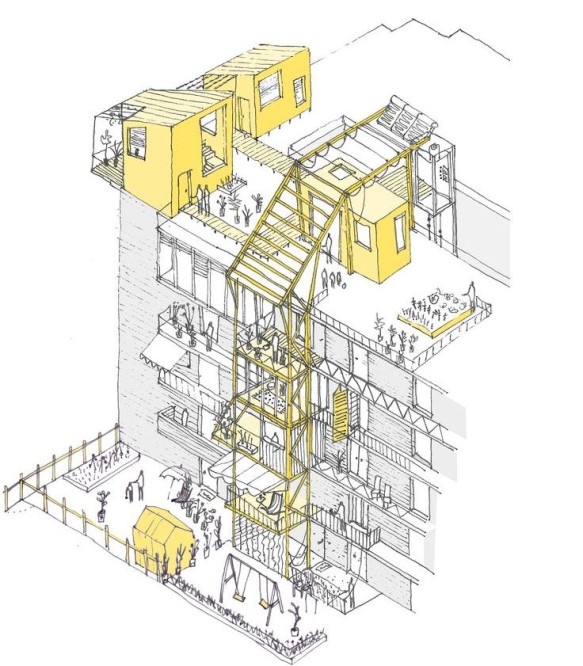 Creating Housing with Sharing in Its DNA

While building new is nifty and all, there’s something very appealing about adaptive reuse. This is why projects like the Providence Arcade, which took an underused indoor shopping mall and converted it to a retail/micro-residential complex, are so appealing. Why build new and use more resources if you can make something that already exists work? A couple young Spanish architects have conceived a project that thinks along these lines, making an existing housing complex more adaptable, social and sustainable than its current moribund state.

The project, dubbed “Improvistos” and conceived by María Méndez and Gonzalo Mancebo, is located in Alfafar, a suburb 4km outside the Valencia city center. Following the collapse of its timber-industry, Alfafar hit hard economic times. Houses that cost $150K decades ago are now fetching $20K, and vacancy rates are high. Méndez and Mancebo’s proposal takes the high density Barrio Orba area of Alfafar and employs the principles of co-housing, facilitating the easy exchange of human, architectural and material resources.

One particularly interesting aspect of the far-reaching plan calls for the addition of doors, staircases, corridors, common areas and satellite rooms that connect the nearly 2800 units and nearly 5K inhabitants. Mancebo told NPR “We’re trying to redefine the limit between public and private. So the way you walk on your street and where your house and your private space finishes or starts.”

This fuzzy public/private spatial distinction would create an easier flow of the area’s limited resources, be they human, architectural or material resources. For example, the plan might capitalize on the 40% unemployment rate, allowing those with time on their hands to trade that for durable goods or an extra bedroom as Méndez told NPR:

For example, you have an 80-year-old person who needs some help once or twice a week, [living alongside] a family with three children that doesn’t get enough income. So maybe [someone from] the low-income family can help the elderly person once a week, and get, in exchange, one room. It’s like an exchange system–so every house can gain or give out some space. And that can change with time.

The plan was innovative enough to win a recent international Urban Revitalization of Mass Housing competition held by the United Nations. Despite the accolade, the plan doesn’t have funding–a problem for an already economically depressed region. But the duo behind the project are talking about launching a Kickstarter campaign to raise money and having residents do some of the work themselves.

What the plan shows is that raising collective prosperity sometimes isn’t a matter of increasing the total amount of resources, but creating social and architectural infrastructures that permit the easy exchange of what we already got. Let’s hope Improvistos get the chance to prove this.