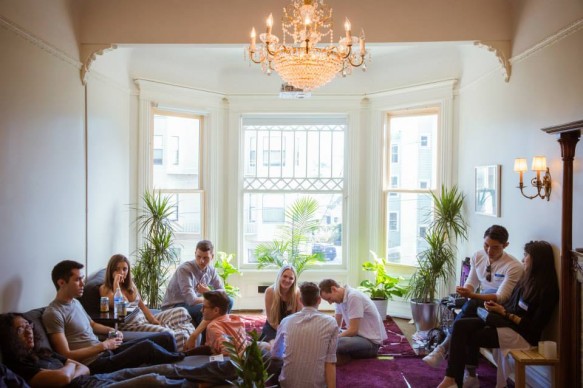 Co-Living for the 21st Century and Beyond

As we’ve seen recently with Stage 3 in NYC, The Collective in London and the expansion of the micro-apartment movement in general, there’s a growing market for minimal, all-inclusive, affordable, community-centric housing. For the most part, these developments are aimed squarely at the lighter-living, typically-single, experience-hungry urban Millennial (sorry for all the dashes). Today, we’re checking out another player in this genre called Campus, a movement/real estate startup with 30 houses, buildings (or portions of buildings) in the Bay Area and New York City.

Campus “communities,” as they like to call their houses, bear some resemblance to living in a dorm on a college campus. They have ample communal spaces and compact private ones. Most communities feature talks, shared meals and other programming to spur relationship building and philosophical waxing.

But the similarities stop there. Campus’ raison d’etre is both more mature and evolved than anything you’re likely to find at a University of Arizona dorm. For example, all houses are connected by a set of shared values that include being:

In other words, the antithesis of most college campus living we know about (save Evergreen State or someplace like that).

In terms of nuts-and-bolts, each room is private and lockable. Rents are month-to-month and each member can opt out at his or her discretion–i.e. you are not tied to the other community members. Rent includes common space furniture, kitchen supplies, common space cleanup and several other amenities (utilities are additional so far as we can tell). Prices depend on community location, room size and a few other variables. For example, a ~70 sq ft room in Park Slope Brooklyn cost about $1200 whereas a space twice that size in the SoMa district of SF costs the same amount.

Campus hardly sees itself as mere purveyor of fun, convenient housing for Millennials. Their mission is to “build better living environments, and…build better housing and cities that are more attuned to people’s needs,” and they have an ambitious, two-phase master plan. Phase one consummates in the formation of 5000 communities in ten cities (they announced locations in LA, Boston and DC will be popping up in the near future). Phase two goes into utopia-production, with an eventual goal of making 100 cities, each with tens-of-thousands of people (see full vision here).

In many ways, Campus is a modern, formalized (but hardly stodgy) and ambitious take of co-living. Like most things, the latest and greatest is part of a continuum of thought. But originality isn’t a condition for doing something useful and cool.