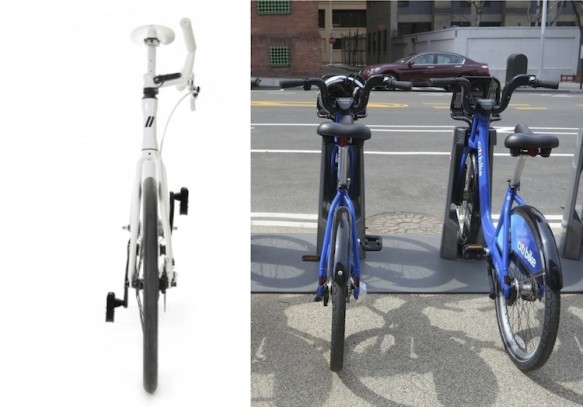 You might put this in the “who asked you” file, but we imagine some of the brouhaha that erupted over the recent release of the CitiBike bike share program might have been minimized had the bikes taken a cue from the ThinBike that founder Graham Hill designed with the help of Schindelhauer. The ThinBike has a quick release on its stem that easily allows its handlebar to turn and lock so it’s parallel with the rest of bike, rather than perpendicular. This set up cuts width in half or more, making storage far easier.

The CitiBike’s controversy stems (pun intended) from the girth of its docking stations, which people have complained are eyesores on New York’s historic streets. People have also complained that the stations hog up the city’s few parking spots (of course, some might consider this a bonus). If the overall width of a CitiBike could be cut in half or more, there would be a commensurate space savings in the overall docking station’s length. You could fit 60 bikes where 30 once were. More important, you could fit 30 in a space that might have only held 15. This smaller footprint on city streets might allay some of the complaints of CitiBike critics. If you think the extra step will invite the lawyers, know that when you straighten the bar on the ThinBike, there’s a bolt that makes a very positive engagement so you know the bar is locked.

Whether it’s fitting more bikes on a block or chairs in a closet, at LifeEdited, we’re always asking how can things be done smaller, better and using less space.