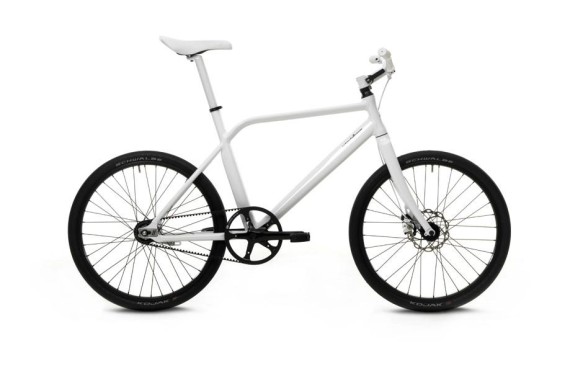 Put Your Bike on Diet with ThinBike

Way back in LifeEdited history (like a year ago), we told you about the super-rad ThinBike that LifeEdited founder Graham Hill helped design with German bike manufacturer Schindelhauer. The one-speed wonder went from a reasonable 21″ width with handlebars in normal position to a mere six with the help of special hardware. The ThinBike addresses one of the biggest bike storage issues, where width can be as problematic as length.

Now Schindelhauer has released a production version of the ThinBike. The bike has evolved quite a bit from Graham’s steed. There is now a front disk brake for superior stopping. It has 24″ inch wheels like those on a cruiser BMX that are stronger and quicker than the previous model’s 700c wheels. It has a two-speed SRAM Automatix shifting system in the event you encounter a hill or bridge. There is a LightSKIN seatpost with integrated LED lights. And it comes with its own proprietary bike rack. Carried over from the previous version are a lightweight aluminum frame (though in different geometry) and a Gates Carbon Drive drivetrain. With its smaller wheels, improved braking, greaseless drivetrain and ease of storage, the new ThinBike will undoubtably make an awesome urban bomber.

And more good news: You can get the bike in the US through Belt Drive Bikes for $1488.00. We look forward to riding ours in the near future. We’ll let you know how it goes.