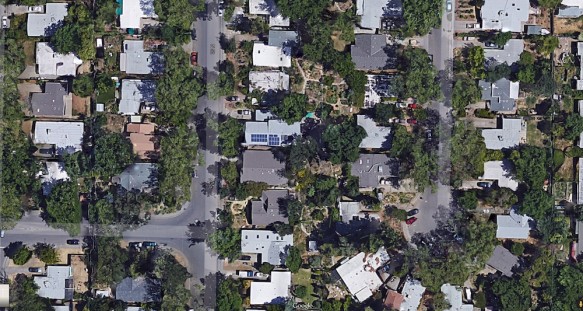 What’s Right With This Picture?

From above, this picture shows a fairly normal suburban neighborhood. There are large, single family homes, each with their own driveways, front and back yards. But if you look closely, right between N St and Lessley Pl, there’s a group of homes with irregular yards. Trees from one property cascade over onto the next. There’s some weird walkway system that flows unimpeded from one property to another. It’s tough to tell where one property ends and the others begins. These are the homes that make up the N Street Cohousing community of Davis, CA.

N Street began in 1986 when Kevin Wolf and his wife Linda Cloud purchased and brought together two adjoining houses. Eventually additional houses were purchased by other parties and brought into the community. 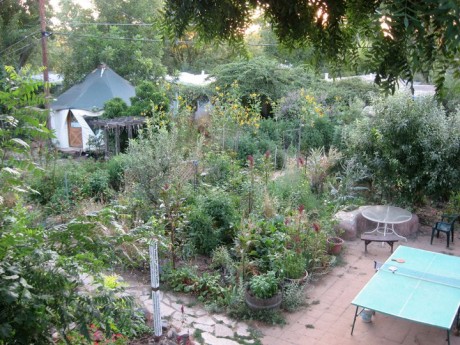 In 1999, the Davis city council recognized N Street as a planned development (PD). According to the N Street website this had a number of community-building implications: “Sideyard setback easements were slightly more relaxed while the backyard setback was extended from ten feet to 30 feet. Construction of larger second unit apartments were allowed.” This permitted the melding of backyards as well as the subdividing of existing houses. Today N Street contains 19 houses with over 60 adults and 5-10 children depending on the year.

The initial house purchased by Wolf was made into a communal house, which has “a four bedroom-two bathroom apartment upstairs and the downstairs includes the community’s dining room (sitting 50 for dinner and 70-80 for concerts), a large kitchen, a TV/meeting room, a bathroom and a shared laundry room.” 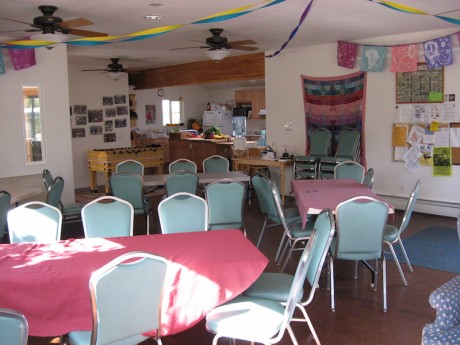 Though it might seem like a commune, all houses are individually owned and occupied, though some owners rent their houses out. And while there are no backyard fences, each house has its own yard that it maintains. Many, if not all, of the yards are landscaped and farmed. There are gardens, chickens coops and more. 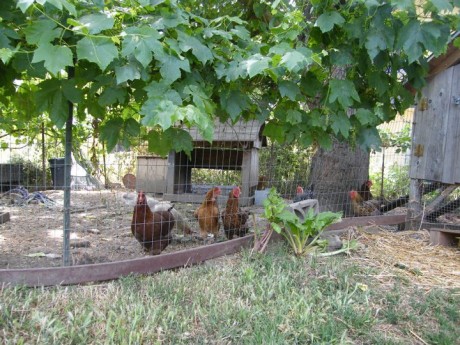 The main thing driving N Street is its culture of shared living and mutual support, of which the community says:

N Street Cohousing has all the attributes of a classic cohousing community. We live together as an intentional community, sharing much of the joys and pains of our lives with each other. We support each other in difficulty and celebrate in success. We sometimes vacation together. We have even been known to fall in love and marry each other. However, we live in our own homes and have our own yards (though without any fences). Each of us can be private when we want to be and each household sets its own culture for visiting, borrowing, and participating.

In cohousing parlance, N Street is deemed “retrofit cohousing”–which is to say the architecture and layout were never designed to be community oriented as they are in developments like Pocket Communities and other purpose built cohousing developments.

This retrofit solution is one of the reasons why N Street is so interesting. In the coming decades, suburban living might present large economic, environmental and social challenges. Without cheap fuel, people might not be able to access their suburban homes in an economically viable manner (this, to a large extent, is already happening across the country where many suburbs are becoming slums). Even with cheap fuel, the carbon production of suburban living–stemming from both large homes and related mobility–will become ever harder to reconcile with the dire need to curb carbon production. And as the population ages, having large, individualized homes that are tough to pay for and access (i.e. drive to and from), will present major issues for a growing older adult community. Despite these challenges, there’s a huge suburban infrastructure that’s not going anywhere anytime soon.

N Street presents one possible way of meeting many of these challenges. Because it has a built-in community, it might reduce the need to drive to see friends and access services. Because it has some agricultural capacity, it might provide a model for self-contained, sustainable living. And because community members look out for one another, and because the houses have the flexibility to be further divided into individuated apartments, allowing for more affordable housing as well as possibly creating ad hoc retirement communities, communities like N Street might provide a supportive housing model for aging populations. All of these things working within the existing suburban infrastructure. One can hope!