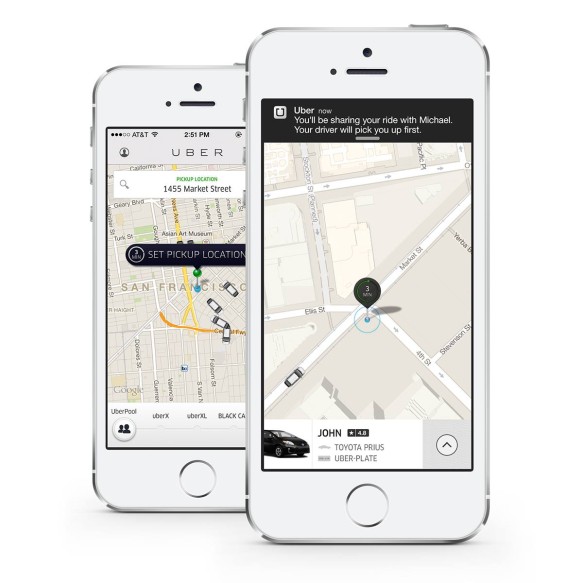 UberPool Makes it Easy to Pimp Your Ride

The world’s roads are littered with people driving the same way–people leaving when you’re leaving, from where you’re leaving, going to where you’re going (or, if not exactly same locale, at least getting on and off somewhere along points on the way). But until now there was no way of connecting those people–likely why 78% of American commuters end up driving alone. UberPool–a division of Uber–is trying to change that, connecting people who are going the same way. From their website:

With UberPool, you share a ride—and split the cost [of an UberX car-service ride]—with another person who just happens to be requesting a ride along a similar route. The beauty, though, is that you still get Uber-style on-demand convenience and reliability: just push the button like before and get a car in five minutes. When we find a match, we notify you of your co-rider’s first name.

Uber says an UberPool car would achieve 36.4 person trips per day (the number of people carried in a car multiplied by the number of trips that car makes in a given day) versus the average private car that only has 4.8. This high volume will theoretically make the service so cheap that it can realistically replace car ownership, halving the price of their UberX service, which they say is already 40% less than a traditional taxi. They think that UberPool’s convenience and thrift will make it compelling enough to eventually remove 1M cars off the road.

The program has been rolled out in beta in Paris, San Francisco and New York City. A Newsweek article reports that some drivers are having trouble using the service and there are complaints about the service cutting into profits for the drivers. Uber has expressed that there are still many kinks in the system–which is why it’s in beta, duh–but that UberPool will ultimately benefit drivers as the service, by virtue of its convenience and low cost, will create ever-increasing volume of people looking for rides, keeping drivers busier than they are now. Like all new ideas, there is bound to be a ramp up period.

It’s pretty clear that we have more resources than we need, but sometimes distributing those resources to people who want them, when they want them can be difficult to say the least. UberPool is a great example of how tech can help us make the most of what we got. We wish the project the best of luck.