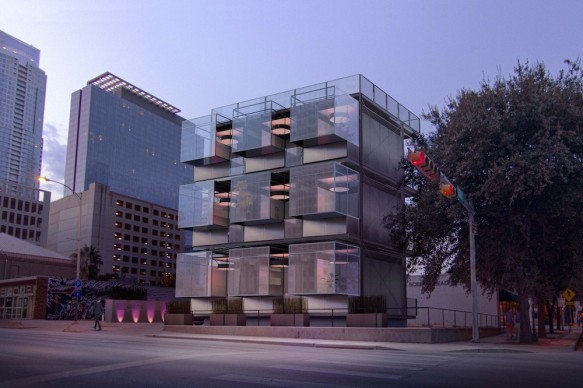 Tiny, Prefab, Plug-and-Play Housing Coming to a City Near You

When we last caught up with Professor Jeff Wilson he was living in dumpster. The reason he was holing up in such an unlikely structure wasn’t merely for shock value (though that was part of it). He was trying to see how minimal a home could be while still achieving a high level of comfort and function. What he found was that 33 sq ft (the size of the dumpster) was too damn small. “At the end of the day, I was still peeing in a bottle,” he told me. But he knew that with the right design, he could make something that was still very small, yet more capable than the his trash bin home. This conceit is informing his latest endeavor. Wilson and his partner Taylor Wilson (no relation) have founded Kasita, a prefabricated, modular housing system that is out to revolutionize compact urban architecture.

“The biggest problem is affordability in urban cores in cities across the world, and housing is at the nexus of this problem,” he told me. The lack of housing drives people to go the outskirts and suburbs of cities, where housing is larger and far more resource intensive. Wilson saw the need for something that could easily densify these urban cores, but nothing out there was cutting it from his perspective. 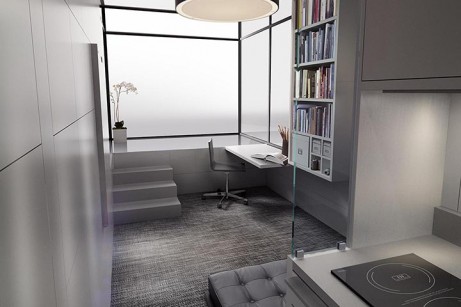 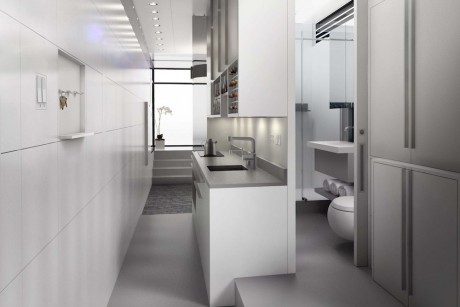 In devising a solution, Wilson bypassed the counsel of architects and sought out the “baddest ass product designer” he could find. Because space efficiency was of the utmost importance, he wanted someone more accustomed to dealing in millimeters than 2” x 4” studs. That person turned out to be noted industrial designer Remy Labesque. The design Labesque created is a sleek, fully-furnished 208 sq ft unit. There’s a small kitchen, seating area, storage and a bathroom. There’s a unique tile system along one wall that can support a variety of plugin accessories ranging from a bike hook to speakers. 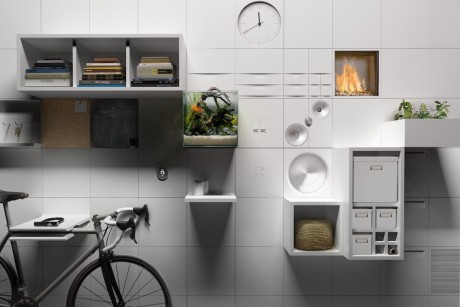 “The bed was the real challenge,” Wilson said. “Most of the tiny housing bed solutions just didn’t seem that great to me. For example, tiny houses usually have low-ceilinged loft beds, which aren’t ideal if you like to drink, make love or do both at the same time.” Because they made their ceilings ten feet high, they were able to use a volume underneath the kitchen for an easily-accessed trundle bed without compromising the overall spaciousness of the unit. 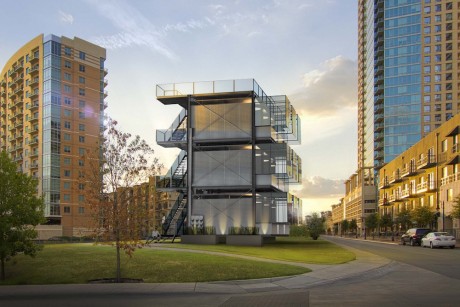 Perhaps the most innovative aspect of the Kasita is its frame that the units are plugged into. The frame is centrally connected to the municipal grid (sewers, water, gas and electric) and utilities are then distributed to the units through the frame’s infrastructure. This makes for quick and cheap set up and construction. This speed will make Kasita ideal for installation in empty or underutilized urban lots. Wilson told me that a nine unit frame can fit onto as little as 1K sq ft; even accounting for requisite setbacks, this is a small footprint. He also said they’re ideal for “flag properties”–odd shaped parcels of land that are tough to fill with conventional structures.

The prefabricated construction, small size and ease of setup result in lower costs. Wilson projects that once production is up to speed, Kasita units will rent at 50% of normal market rates for comparable studios, which in Austin is $600.

Oftentimes when I see awesome renderings such as Kasita’s, I think of the V word (“vaporware”–something that looks and seems cool but has almost no chance of being built). Wilson assured me that Kasita is not that. The first prototype unit is expected to be complete in three weeks and a 2 x 2 frame will be complete a week later. They have already purchased land in Austin to build the first 3 x 3 Kasita building. Most crucially, they have been working with Austin Planning and Zoning Department as well as the Texas Department of Licensing and Regulation to ensure that Kasita is code compliant. They have already received a round of seed funding and will be raising their Series A later this year. He expects to have the first Kasita building built by the end of 2016. We wish them godspeed and look forward to seeing these built.