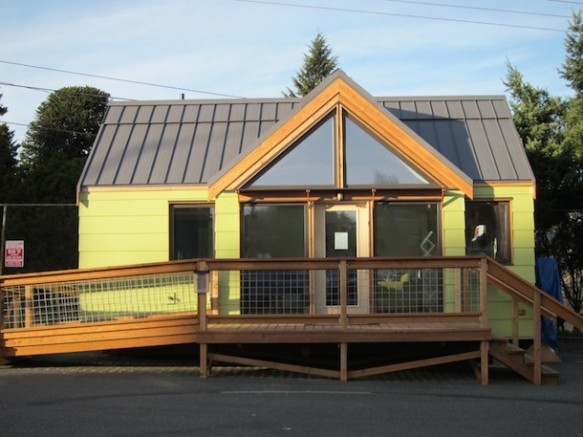 Don’t be fooled by its peace-loving name, few things will defend you from the elements like a Passive House. If you’re not familiar with the term, Passive House (aka Passivhaus) is a German-born set of rigorous building standards that make a dwelling extremely energy efficient. Passive House construction implements energy saving measures like super insulation, passive solar design (i.e. optimizing a structure’s orientation to put the sun to good use–either shielding it from the hot in warmer regions or adding solar heat in colder ones), triple or quadruple-glazed windows, an airtight building envelope and various natural or mechanical ventilation systems that keep fresh air circulating through the interior. The LifeEdited apartment, though not Passive House certified, employs a number of Passive House strategies such as a tight air barrier and the use of a heat recovery ventilator (HRV); this allowed us to super insulate the space such that we were able to reduce the number of radiators from five to one.

But just because a dwelling meets the Passive House standard doesn’t mean it’s required to be a particular size. In fact, many Passive Houses are quite large. And as we know, you can have the most energy efficient home, but if you have to drive a couple hours to get to it, it seriously affects the home’s overall resource consumption. The marriage of small, dense housing with Passive House levels of building efficiency would be a felicitous one. And that’s exactly what Mini-B Passive House is all about.

The 300 sq ft house is the brainchild of architect Joe Giampietro. It was designed to be used as a detached accessory dwelling unit (DADU) in the Seattle area, though we imagine it could be setup elsewhere. The house uses nine inches of foam insulation, a heat recovery ventilator and quadruple glazed windows among other things. Its insulation is so complete that the rare bit of Seattle winter sunlight or, in extreme cold, a tiny wall mounted heating panel, are all that are needed to make the place comfortable. It’s estimated annual heating bills would run about $30 and electricity a mere $100.

The house was built by students and used as a demo before eventually being auctioned off. On their website Giampietro says that Mini-B plans and constructed homes are available to purchase, details available upon request.