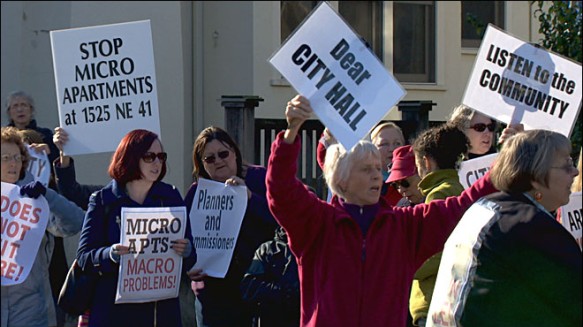 Apparently, strong coffee and grey skies aren’t the only commonality between Seattle and Portland. Like its northern neighbor, Portland has jumped on the micro-apartment bandwagon. More specifically, Portland is mirroring Seattle’s boarding-house style micro-apartments (often known as aPodments, which are actually the name of apartments developed by Calhoun Properties, not a general term). These apartments typically feature very small units (150-300 sq ft), a kitchenette, a shared kitchen and a personal bathroom rented at a low, all-inclusive price (often below $1000).

Just like Seattle, some Portlanders are up in arms about the perceived effects of these dainty digs. The issue, once again, is parking. Right now there are two developments causing the stir, both being developed by Snohomish, WA’s Footprint Investments. One is under construction in northwest Portland and another is looking for city approval in the northeastern Hollywood neighborhood. The apartments, enjoy a “group living” designation–the same as dormitories, monasteries and convents. As such, they are not required to provide a set amount of parking spaces. The threat of lost parking in the neighborhoods has spurred protests.

We can’t help but think this is another case of NIMBY-itis. Everyone loves the idea of more walkable and bikeable neighborhoods. They love the idea of housing that supports public transportation (both developments are close to transit hubs). And they love the idea of building space and energy efficient housing. But when these ideas include the possibility–not the reality, mind you–of fewer or further afield parking spaces, people seem all too willing to squash those ideas.

From the outside, it seems like micro-apartments are a decent solution for a city with 3% vacancy rates for rentals and whose rents have increased 6-7% in the last four years. They also seem like a decent solution given the fact that even though there was a big hullaballoo about parking in Seattle, there were few reports of parking being a real issue. Most people live in micro-apartments to save money; the buildings are situated in central locations, making it easy to get around by foot, bike or public transport, thereby avoiding costly car ownership. Most Seattle micro-apartment developers claim that only 10-20% of their residents have cars.

Just so we don’t seem like blind advocates to micro-apartment living, some regulation is probably in order. Most of the residents of these developments will not be monks and nuns. And while Portland’s public transportation is probably great for a city of its size, it’s not on par with larger metropolises like NYC or Seattle; cars, for some, are a practical necessity. In short, there should be some accounting for parking. But this can be a future-based conversation. Why not wait to see if any problems actually crop up? The city of Portland seems to think this a sound tack. Elizabeth Hovde of Oregon Live reported this:

When I asked Joe Zehnder, a chief planner for the Bureau of Planning and Sustainability, about whether the definitions will be updated to better accommodate micro-housing, he said, “We need to see how this type of building performs. So we have nothing underway.”

Not to seem too insensitive to the plight of these Portlanders, but what if the micro-apartments reduce the number of available spaces in these neighborhoods? What if people had to walk a little further to and from their cars? As someone who has owned a car in NYC, I know that making parking difficult makes you far less inclined to drive. It makes walking, biking and using public transport far more attractive. These consequences, which support personal and planetary health, seem like questionable foes to fight.