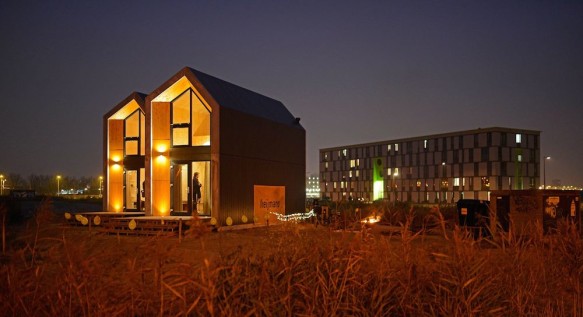 Around the world, cities are feeling increasingly pinched for space, resulting in major housing shortages. A project out of Amsterdam has a solution–well, a temporary one at least. Conceived by real estate developer Heijmans, Heijmans ONE is a dwelling that can be set up and taken down in a day. The dwellings intended homes are construction sites that have been stalled by economic crisis.

The dwellings, according to Heijmans, are specifically intended for well-educated people between 25 and 35 years old, in their first job and single–a population they say will number “no less than 700,000”; a population who, like their American counterparts, are living with their parents longer; and who “earn too much for social housing, [but] too little for the free rental sector.” By placing the Heijmans ONE in derelict construction sites on the outskirts of town–ones “where nothing has happened for years”–they believe they can offer the units for as little as €700/month (~$900). This will give these folks a foothold in the housing market as well as an attractive place to live. Heijmans would like to create clusters of the units to make insta-communities.

The units are basic, but nice, and certainly nicer than most infill architecture. They have real kitchens and bathrooms, a nice living room and lofted bedroom. They use solar power, but are hooked up to municipal sewer lines (Heijmans eventually wants to take them off-grid). Heijmans is currently running a test run of the dwelling, with one woman living in the unit for three months.

We’re not sure about all the economics behind the project, how feasible it is to setup camp in these derelict construction zones (we imagine there’s a ton of liability for the host) or what Millennial would really want to live on the outskirts of town, much less in a derelict construction zone or where the residents go should construction resume. But desperate times call for innovative solutions, and we applaud Heijmans for tackling a pretty big global problem and being willing to work out the kinks as they go.