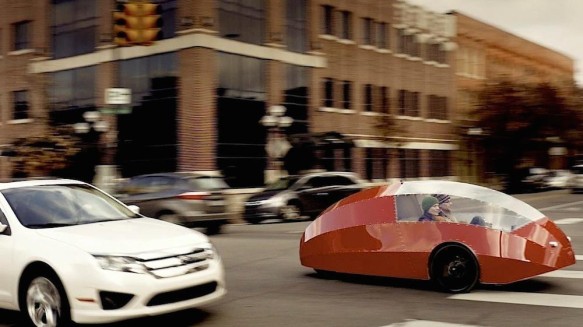 We are forever on the lookout for great ‘edited’ transportation options. Bikes, walking and public transport are the ostensible ideal modes of transit, but for many they lack the protection, carrying capacity and range to make them feasible daily transport. Conversely, car-shares, trikes and other minimal ways of getting around using internal-combustion engines and 1K lb + masses of metal are overkill for many. A company called The Future People is striking a nice middle ground. Their Future Cycles are lightweight, human powered vehicles that, for some, could be real replacements for the personal car.

TFP is a design collective, principally made up of husband and wife Cameron and Rachael Van Dyke. According to their website, they are out to “test alternative value systems related to housing, transportation, and community.” They unveiled two Future Cycle models at the recent Detroit Auto Show (TFP’s hometown), wanting to “propose an alternative set of values in relation to transportation,” according to a press release.

One model is named the Cyclone. It’s powered by two peddlers up front and seats four. According to TFP, it takes design cues from the Model T and the iPod. With its mahogany floors and leather seats, it is painfully stylish, however I suspect it’s boxy shape is like doing a bellyflop with the wind (not cool when efficiency is the name of the game) and I might trade those amazing-looking mahogany floors for something lighter (though, to be fair, it is a concept).

Far more interesting is the Zeppelin, a slug-shaped two-seater with pedals and a 750w electric rear motor with a 20 mile range. It only weighs 270 lbs, has a big boot for lugging stuff and can cruise at 25 mph on flat ground. The shape, unlike it’s boxy brother, looks like it would slice through the wind. It meets the federal bicycle classification and therefore requires no license, registration or insurance.

“The goal with the Zeppelin was to find an ideal point at which a bicycle and car could coexist within the same object,” according to Cameron Van Dyke, “creating a truly hybrid design.”

If you want one of these vehicles, you are probably going to have to wait. Unfortunately, unlike the Organic Transport ELF that we looked at last year, the The Future Cycles don’t appear to be for sale. We hope that changes.