Elio Motors is Editing the Car by Removing a Wheel

According to the US Census Bureau, 76% of all American workers drive to work….alone. Even though there are so many single-occupant drivers on our roads, most of the cars we drive weigh two tons, carry five + people and can haul a Costco shopping spree’s worth of goods. If we are to edit the car, we must design around actual usage, not the every-blue-moon antiquing expedition with the in-laws. A startup called Elio Motors is doing just that: they are making a two-seat, three-wheeled, lightweight, fuel-efficient, aerodynamic vehicle that will get you from A to B comfortably and quickly. 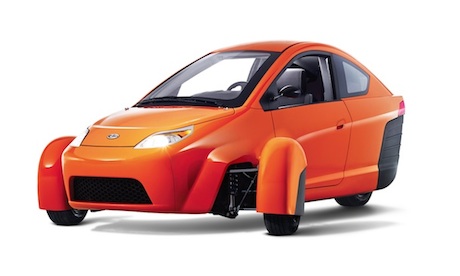 The little vehicle will be powered by a .9 liter three cylinder internal combustion engine. By virtue of its 1200 lb curb weight and aerodynamic shape, it is projected to achieve 49 mpg in the city and 84 mpg on the highway. Driver and passenger are seated tandem style and there is even a small boot for groceries or a very short road trip.

And fear not, the Elio will not become SUV Chow in a crash. With its roll cage, large crumple zone and multiple front and side airbags, they expect the vehicle to achieve a five star safety rating.

We have used the words “will” and “projected” and “expect” because the Elio ain’t quite here yet. In fact many of the claims–the fuel economy, crash-star rating–are computer generated projections, not real world outcomes. Though the company has plans to produce 250K trikes a year and has already taken 13K preorders (price is expected to be just $6800), the venture is still trying to raise the money necessary to go to production.

One of the problems–one that Mr Elio brushes aside in the above video, but the NY Times highlights–is the Elio’s designation as a motorcycle by the federal government. This would have two implications: 1. most states would require a helmet for operation, something founder Paul Elio says is actually a safety hazard, and 2. every state except Kansas would require a motorcycle license, which is usually obtained taking a test on a two-wheeled motorcycle; this might pose a problem for some octogenarian or someone else not up for motorcycle operation who is interested in a small, safe vehicle to get around in. 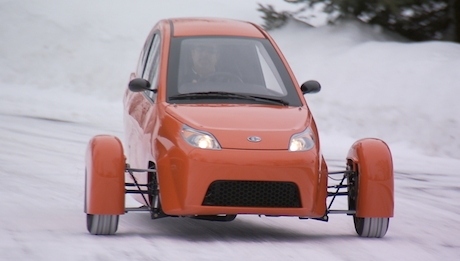 The designation might be part of the reason why Elio Motors still needs about $150-200M before they begin production (ironically, they plan to produce them in a former Hummer factory in Shreveport LA).

Another reason is simply the genre-defying nature of the Elio trike. In an interview with the GAS2 blog, founder Paul Elio said that he is “creating a new product segment like the iPad or Sony Walkman”–a claim we don’t think hyperbolic. It’s half the size and twice as efficient as most sub-compact cars, but it is much safer and more comfortable than a motorcycle. If you can’t walk, bike or take public transport, having a minimal vehicle like the Elio is your next best option.

Mr Elio is confident that they will raise the money as they continue to develop the production model. He expects production to begin next year. We couldn’t agree more that there is a big need for a small vehicle delivering basic transportation and traverses long distances swiftly and efficiently. We wish Elio the best of luck and hope to see their trikes out on the road in the near future.