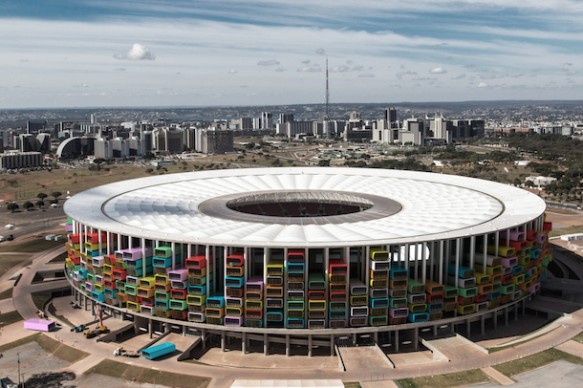 The World Cup of Housing

Unless you were living under a rock, in a cave, located in the Marianas trench, chances are you heard about the World Cup games that recently concluded in Brazil. What you might not know is that there were twelve stadiums used for the games located around the country, several of which were purpose-built and aren’t slated for particular teams or uses. Rather than let these monstrous buildings deteriorate under the weight of their orphanage and redundancy, architects Axel de Stampa and Sylvain Macaux created the Casa Futebol project, which reenvisions the stadiums as housing for both sport and people.

The project proposes that 105 sq ft prefab housing modules be inserted into the cement pilings and other unused spaces in both the stadiums’ interior and exterior spaces. How the modules are inserted depends on the construction of the particular stadium. The cost of building would be offset by ticket sales as people would be living in actively used stadiums (good luck making a noise complaint).

Casa Futebol is part of the 1 Week 1 Project started by de Stampa and Macaux. They dub the frequently fantastic proposals that come out of 1W1P as “spontaneous architecture.” They take specific sites and propose unconventional architectural interventions that address some need–in this case providing affordable housing in stadiums with uncertain futures.

We like projects that transform un-or-underutilized spaces into insta-communities. We do wonder about the settings for some of the stadiums. At least in the States, stadiums are often on the outskirts of towns. If this were the case in some of the Brazilian stadiums, it could create insta-slums, due to their isolation from commercial centers. Then again, maybe we’re overthinking it.

What do you think? Is Casa Futebol a viable solution for low-cost, mixed use living? Or is it urban planning fantasy?